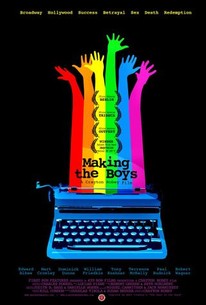 MAKING THE BOYS tells the story of Mart Crowley's groundbreaking play "The Boys in the Band" - from overnight sensation on Broadway, to Hollywood's first gay movie, to cultural landmark and worldwide phenomenon - all the while having a complicated and sometimes controversial relationship with the gay community. No one could have guessed the impact that a small Off-Broadway production would have on the social climate of the 1960s...not to mention how important and monumental it was to gay people at the time, many of whom were still in the closet. MAKING THE BOYS features illuminating and entertaining footage from the period, interwoven with extensive interviews with Crowley; William Friedkin, the Oscar-winning director of the BOYS movie; and a host of luminaries inluding Dominick Dunne, Tony Kushner, Terrence McNally, Edward Albee, Dan Savage, Robert Wagner and many others. It also tracks the trajectories of the original cast members of the play and the movie. -- (C) First Run Features

Critic Reviews for Making the Boys

Crayton Robey's documentary is a time capsule of the burgeoning gay rights era. It has poignant moments that sneak up on you. And sometimes, well, it's just trashy fun.

Almost simultaneously a groundbreaking landmark and a period piece.

Sometimes, it errs on the side of inclusiveness, with banal commentary from gay reality-TV shows. Taking the broad view mostly works, however.

The hopelessly dated 1968 play "The Boys in the Band" yields a surprisingly sprightly and multifaceted documentary, "Making the Boys."

An entertaining and compelling reason to either reconsider the polarizing work or to experience it for the first time with due regard for its original context.

A fine new documentary about the evolution of the controversial play and subsequent movie.

For all the attention paid to the issues surrounding Boys, however, but for a handful of too-short clips, there's surprisingly little detail about the specifics of the film or play

It is hard to make a lively documentary out of talking heads, but Robey has done that as he puts the play into historical perspective.

Scrupulously researched, highly absorbing and worthwhile documentary about, like it or not, the seminal gay play.

A comprehensive look at the creation and afterlife of a significant work of art.

Audience Reviews for Making the Boys

As far as any impact that the play "The Boys in the Band" had, it was in showing gay men not as sidekicks but as taking leads in their own lives which was revolutionary in 1968. Where the occasionally insightful documentary "Making the Boys" goes too far is presuming that "The Boys in the Band" had anything to do with influencing the Stonewall Riots(the theory concerning any connection with Judy Garland's funeral has already been disproven), as its now dated attitudes push it towards the "Will and Grace" end of the cultural impact spectrum. "Making the Boys" also errs by going off topic at times while exchanging its background with the foreground. I mean, if you're interested in seeing this, you probably already have a pretty good idea about the history of the gay rights movement that ironically includes testimony from Ed Koch. But it should also be noted that most of the original cast members died of AIDS, another of leukemia, leaving three alive, two who agree to talk on film. Of playwright Mart Crowley, he started out as assistant to Natalie Wood and would go on to be a writer/producer on 'Hart to Hart.'

Interesting film about the creation of the play THE BOYS IN THE BAND and its writer Mart Crowley. Though in the end the documentary casts its net more than a little too wide, encompassing the birth of the gay rights movement and the AIDS epidemic within the story of one play (and ignoring some key details about the life/career of the playwright in the years following the play's success), it's still a largely fascinating snapshot of a moment in theatre (and maybe even cultural) history. As somebody who has decidedly mixed feelings about the play itself, I was surprised how engaging the film is. Alternating between interviews with other industry professionals and people involved in the original production, the flick makes a strong and convincing argument for the importance of this piece of writing in not only a culture, but a cultural movement.