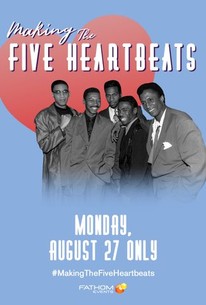 Fathom Events take you on a journey to a classic... that almost didn't happen when Robert Townsend's Making the Five Heartbeats premieres in cinemas on Monday, August 27. A love letter to the movie's fans, as well as a master-class on filmmaking, Making The Five Heartbeats chronicles the inspiring journey of a young black writer/director determined to present a new image of black people in cinema while endeavoring to create a classic. This story is told through behind-the-scenes footage and personal stories with the five stars of the film (Townsend, Michael Wright, Harry J Lennix, Leon Robinson, Tico Wells), plus co-writer Keenen Ivory Wayans, and the film's bad guy you love to hate, "Big Red" (Hawthorne James). In addition to the documentary, attendees will view an exclusive welcome from Townsend.

Hawthorne James
as Himself

Robert Townsend
as Himself

Tico Wells
as Himself

Michael Wright
as Himself

Michael Wright
as Himself
View All

It too often comes across as a vanity project, and an overextended one at that.

Robert Townsend's reflective "Making the Five Heartbeats" serves as an illuminating documentary detailing the considerable passion and perseverance that went into bringing his dream project to the big screen.

There are no featured reviews for Making The Five Heartbeats at this time.