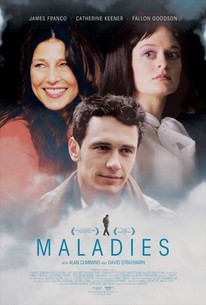 A daring new film from internationally acclaimed multimedia artist Carter, MALADIES charts the struggles of an unstable former soap opera star (James Franco) in 1960's New York as he tries to restart his floundering creative career. Hoping to find clarity and new purpose as a writer, he holes up with his eccentric sister (Fallon Goodson) at the seaside home of their best friend (Catherine Keener). But as he disappears further into his own mind, reality begins to slip through his grasp. Featuring an award-winning ensemble, including David Strathairn and Alan Cumming, MALADIES is a heartfelt but defiantly unconventional exploration of the creative mind.​ (c) Tribeca

Jean Carter
as Lady in Diner

Madalyn Davis Lester
as Woman in Cast
View All

For what it's worth, there's nothing outrageously awful about the film... It's just utterly bland.

...we basically wanted to punch the film in the face.

A mess that will no doubt meet a merciful box office death.

"Maladies" remains on too low a boil to communicate any sense of stakes for the various characters. It seems to be trying to say something about creativity, and living one's life on one's own terms, but it's a muddle.

It courts pretension with blithe disregard at every turn.

For a film that seems to be exploring the difficulty in creative expression, Maladies seems afflicted by an inability to say much at all.

Despite its big-name cast (Catherine Keener is on impressive form), most viewers will find it an impossibly pretentious, drifting picture that, while brimful of pseudo-philosophising, lacks substance where it matters.

This is Franco's second directorial collaboration with the artiste who goes by the name of Carter, and hopefully they won't push their luck further.

If there's any point to be made it's lost in a sea of meaningless quirk masking as profundity.

Ultimately it adds to the eternally ongoing cinematic conversation about artists and the quirks (healthy and otherwise) that define them.

There are no featured reviews for Maladies at this time.