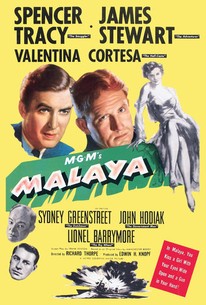 Spencer Tracy and James Stewart team up for this World War II adventure, based on an supposedly true incident from World War II. Stewart plays John Royer, an ex-newspaper reporter with a backhand knowledge of Malaya, and Tracy plays a criminal named Carnaghan, doing time in Alcatraz for smuggling. They are brought together for an undercover assignment -- to smuggle a large shipment of rubber out of Japanese-held territory in Malaya and deliver the tonnage to awaiting U.S. ships. Carnaghan and Royer plod through the jungles and have to deal with several unscrupulous contacts including a man calling himself The Dutchman (Sydney Greenstreet), a helpful FBI agent named Kellar (John Hodiak), and a sneaky Japanese officer by the name of Colonel Tomura (Richard Loo). ~ Paul Brenner, Rovi

Robert B. Williams
as Army Sergeant

Bill Self
as Henchman

A minor film in all the actors filmography but still an enjoyable adventure that is made better by their involvement. This was Sydney Greenstreet's last film and his role is a fitting one, neither hero nor villain but filled with chances for him to imbibe it with his customary humor and sly wit, he even gets the final shot in the film which adds a nice touch as a capper to his career.