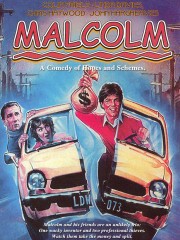 Timm S
½ September 17, 2014
An Aussie Comedy That Works Because There Is A Strange Affection One Has For The Innocent Nature Of Malcolm. Unsolicited Other Than A Desire To Help, He Helps Find Adventure & Happiness In A Rather Unusual Manner.

Shane D
July 28, 2014
A genuinely funny, quirky and Australian film. A brilliant caper with a sense of fun and solid performances from the central characters. When I was much younger, I remember the effects and "inventions" being presented as cutting edge and for an Aussie film shot in Melbourne it was something of a victory. Great stuff!

Gavin P
September 7, 2013
Not bad for an 80s Aussie comedy! Friels is good as Malcolm (reminds me a little of Ricky Gervais in Derek), a tram operator/inventor who is 'corrupted' by Frank. Very Australian - and very 80s, with some terrible hair/fashion! - and quite funny and charming, even when it turns into a heist film at the end, but there's no malevolence at all. Worth a watch!

The Critic (
½ February 3, 2013
A very charming and quirky tale, economically woven together and held tightly by Colin Friels, John Hargreaves, and Lindy Davis, whose solid performances and chemistry keeps us invested in their flawed yet always accessibly characters.

Warren S
February 28, 2012
Undiscovered gem from Oz. Nadia Tass sold her house to pay for this film. Very ballsy and I think worth it. A lot of fun if you can get hold of it

John K
½ April 14, 2011
Funny, offbeat and refreshing. Definitely worth seeing. I was in stitches the first time I saw it.

Archibald T
March 22, 2011
Malcolm works for the Melbourne tramway company. One night while every one leaves, he rides around on his own tram that he built himself leading him to get fired. He lives alone with his cockatoo named Arnold. He knows an old woman, Mrs. T, who works at a small store and she gives him milk on his remote control car, but one day she doesn't give him any. He marches to the store. Since he's unemployed and has very little money, she can't give him any milk. She suggests that he rents out a room that way he can get money.

One day, a sloppy criminal named Frank shows up and gets the room. He's a bit baffled and on edge. He's unsure about Malcolm at first, but Malcolm slowly becomes aware that he's harboring a criminal and he doesn't seem to mind. Frank's main sheila (this is an Aussie picture) Judith shows up next to stay as well. Malcolm is very shy around her especially when she wears loose clothing.

The three begin a partner ship which forms slowly. Judith tries to work at a bar while Frank tries to steal televisions. Malcolm invents! He even has a contraption where his own mailbox is remote controlled. That way when he gets the mail it can come to him instead of him coming to it. He is a genius or more of a master of remote controlled things. He even makes a get away car for Frank that can split in two independently powered halves. It's a pretty fun scene to watch, but what out rivals it is the ashtray sequence.

Three remote controlled ashtray's are placed in the bank for which they plan to rob. They control them to get into an elevator and once they've set them in the spot they begin their attack. Gas bombs, a gun that shoots and even a hammer to smash out a window to drop the money bags into their van as they make their unforgettable getaway.

The film is basically simple. The criminal rents out a room of whom the owner happens to be an inventor of things and before you know it the criminal and the inventor join forces to rob a bank and indeed get away with it. It's a great film with an excellent soundtrack from the Penguin Cafe Orchestra. I can still hear the music in my head. Really fun.

Tracey c
November 10, 2010
Watched this movie a long time ago...it was so funny...nice train track...Try and look around for this dvd.

Bruce s
October 1, 2010
agrate film fum for the hole family /
Malcolm is a chronically shy mechanical genius who has just been fired for building his own tram. He gets Frank, who has just been released from jail, moves in to help pay the bills. Malcolm, with Franks help, turns to a life of crime.
if u love remote toys the u will love this film and just goes 2 show that u do if u put ur mind 2 it u can achieve anything

Cam B
July 31, 2010
I absolutely loved this when I was a kid, and have memories of laughing at many of Malcolm's gadgets...but wouldn't have seen it for 20 years, I reckon, till I revisited recently. Found the first half a little more difficult this time around, as I was wondering how the relatively socially inept Malcolm came to be as he is - was it upbringing? a disability of some sort? But once Frank arrives and Malcolm's gadgets start to come out, it became oh so much silly fun once again. The most endearing bank robbers we've ever seen on film...

Chris M
July 2, 2010
One of my most favorite movies of all time I spent years looking for this one

Lee M
April 18, 2010
Whatever it was about this film that resonated so well with the Aussies in 1986 that it won 8 AFI awards fails to transcend time and space. In 2010 America, the film comes across as a dumb, yet sweet, little indie film.

brendan n
½ January 28, 2010
underrated australian film that supplies many classic and memorable scenes. the characters are likable and the film has an oddball style to the humour.
great for its time and still an innovative slice of australian filmmaking which sadly has disappeared over the years.
Page 1 of 4