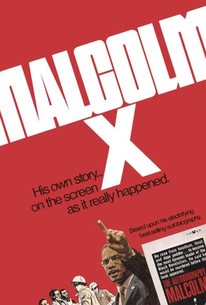 This 1972 documentary tribute to the life and work of the assassinated Black Muslim leader Malcolm X was poorly received at the time of its release. However, it has grown in importance as Malcolm's place in African American history has grown. The backbone of the documentary is based on The Autobiography of Malcolm X. This documentary, made with the help of the Malcolm's wife Betty Shabazz, recounts the life and ideas of this controversial man. James Earl Jones, Ossie Davis and Steve Benderoth provide the narration. In addition to clips of Malcolm X in public interviews and speeches, numerous important civil rights figures are featured, as well as important public officials from the period. In 1992, director Spike Lee released another major film biography of Malcolm X, called Malcolm X.

It stands as a vital record of a man of our time, that rare man who grew and changed and tempered his views to his intellectual maturity alone -- and never to the times.

Without it all we can see is part of the man and Malcolm X will remain a good film which might have been great.

There are no featured reviews for Malcolm X at this time.