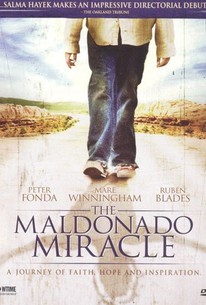 Actress Salma Hayek makes her directorial debut with this heartwarming drama based on the novel by Theodore Taylor. José (Eddy Martin) is a young boy from Mexico who sneaks into the United States in search of his father, a migrant worker. On the run with an injured arm and looking for a place to rest, José sneaks into a church in San Ramos, CA, and hides in a scaffolding above the pulpit. Blood from José's arm drips onto a statue of Christ, and the next morning when Josephina (Soledad St. Hilaire), a devoted member of the congregation, arrives for her daily prayers, she's convinced that the plaster figure is weeping tears of blood. Father Russell (Peter Fonda), the parish priest, isn't sure if this is a genuine miracle or not, though given the town's financial woes and his own waning faith, the timing would be good for one. As Father Russell tries to determine just what has happened, Josephina begins spreading word of the miracle, as and the story spreads, it becomes increasingly embellished. Soon curious believers and intrigued skeptics flood San Ramos, boosting the town's sagging economy, with Maisie (Mare Winningham), proprietor of the local cafe, one of the prime beneficiaries. Maisie, however, has also discovered and taken in José, and when she and her friend Cruz (Ruben Blades) learn the truth about the weeping statue, they're unsure if they should tell the townspeople just what has happened. The Maldonado Miracle was produced for cable television broadcast in a partnership between Hallmark Productions and the Showtime premium cable network.

Christina Cabot
as Stella
View All

Critic Reviews for The Maldonado Miracle

There are no critic reviews yet for The Maldonado Miracle. Keep checking Rotten Tomatoes for updates!

Audience Reviews for The Maldonado Miracle

There are no featured audience reviews yet. Click the link below to see what others say about The Maldonado Miracle!