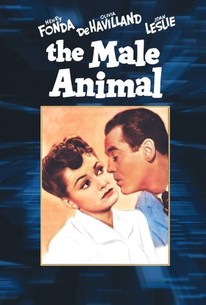 In this screen version of the James Thurber-Elliot Nugent Broadway play of the same name, Henry Fonda stars as bespectacled, bookish college professor Tommy Turner, who puts his career on the line by insisting upon standing up for his right to free speech. Determining to read a letter written by executed anarchistic Bartolomeo Vanzetti to his classroom,Tommy not only risks dismissal and castigation by the conservative college trustees, but seriously jeopardizes his marriage to his wife Ellen (Olivia DeHavilland), who wishes that Tommy would stop making waves and start lobbying for a raise. Coinciding with all this is the arrival of former college football star Joe Ferguson (Jack Carson), who many years earlier had been Tommy's rival for Ellen's affections. Eminently successful and aggressively athletic, Joe seems to be everything that Tommy isn't, and the little professor is worried that he's going to lose Ellen to Joe after all. An all-night drinking session with equally idealistic student Michael Barnes (Herbert Anderson) convinces Tommy to stick to his principles no matter what the cost-and miracle of miracles, this resolve makes him a hero in everyone's eyes, including sweet Ellen. The Male Animal was remade in 1952 as She's Working Her Way Through College, with the liberal ideology of the original film sacrificed in favor of McCarthy-era banalities.

William B. Davidson
as Alumnus

Will Morgan
as Reporter

Creighton Hale
as Reporter
View All

Critic Reviews for The Male Animal

The stagebound film has its amusing moments, solid performances and a still timely message about academic freedom.

A surprisingly relevant movie on academic freedom in light of Ward Churchill and pro-Palestinian professors being victimized today.

Audience Reviews for The Male Animal

There are no featured audience reviews yet. Click the link below to see what others say about The Male Animal!