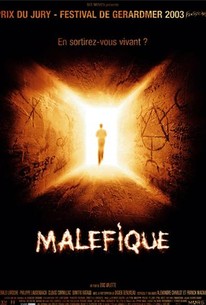 Four prisoners sharing the same cramped cell make a discovery that could help them escape from even the most high security prison if it doesn't split their world wide open first. Carrere is an ambitious company director serving time for fraud, Marcus is a thirty-five year old transsexual on course to becoming a real woman, Daisy is a mentally deficient servant, and Lassalle is a sixty year old intellectual who murdered his wife of many years. Together, these lawless misfits do their best to serve their time without losing their minds. One day, after discovering a loose stone slab in their cell, the four incarcerated convicts unearth the diary of a former prisoner named Danvers who occupied the exact same cell at the turn of the century. According to the diary, there exist magic formulas so powerful than any prisoner could use them to escape. Later, when the men attempt to decipher the formulas, the entire prison becomes a terrifying cauldron of bizarre phenomena. ~ Jason Buchanan, Rovi

There are no critic reviews yet for Maléfique. Keep checking Rotten Tomatoes for updates!

Malefique is a decent French supernatural horror film. Four prisoners sharing one cell discovered a book which could be the only hope of their escape, but the book contains more trouble than it seemed. It's a little bit slow but you get to know all of the characters and the special effects were magnificent too. Overall a nice little gem to understand the darkest secrets of people.

I loved this. Tiny set, never lets up on the strangeness, deals with the occult alongside real-life horrors, and still packs in some great gore. Using the tinniest of settings - one prison cell - the film stages a grand odyssey and one never tires of the setting. As usual, I've got to complain that I don't think the trans character was handled in a manner consistent with the aspirations of trans-aware advocate-artists like myself. All of the (four main and one temporary secondary) characters are complex and intriguing. For once, I'm not really that incensed at a "twist" ending, though I do think it was not appropriately foreshadowed and a montage of clips that were supposed to foreshadow the reveal shown right before the reveal is way too cliche and should have been cut. Overall, the feeling of being utterly trapped with something so cryptic and powerful and surrounded by dangerous people is perfectly conveyed. I do wonder if there are modern prisons that are this shitty, though.

A very entertaining film that keeps the pace going with a decent story, well written dialogue and good characters. Reminds me of a lot of the older horror films where plot actually meant something.