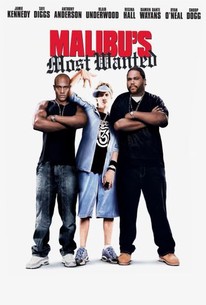 Critics Consensus: Malibu's Most Wanted gets a few laughs, but nowhere near enough to sustain its running time.

Critics Consensus: Malibu's Most Wanted gets a few laughs, but nowhere near enough to sustain its running time.

Critic Consensus: Malibu's Most Wanted gets a few laughs, but nowhere near enough to sustain its running time.

A rich kid who likes to pretend he's from the wrong side of the tracks gets a taste of the real thing in this comedy. Brad Gluckman (Jamie Kennedy) is the son of a wealthy and socially prominent couple (Ryan O'Neal and Bo Derek) and grew up in the lap of luxury in Malibu, CA. However, Brad likes to imagine he's a street-smart gangsta from the mean streets of L.A., and he's been trying to launch a career as a hardcore rapper under the name "B-Rad." Mr. Gluckman is running for Governor of California, and both he and his campaign manager (Blair Underwood) are convinced Brad's antics could have a negative impact on the election, so they come up with a scheme to change his mind about the supposed glamour of street life. Mr. Gluckman hires a pair of African-American actors (Taye Diggs and Anthony Anderson) to impersonate a pair of gang-bangers from Compton who carjack Brad's SUV and take him to the 'hood, where he'll learn just how scary the thug life can be. However, it soon becomes obvious the actors don't know much more about life in Compton than Brad does, and as Brad gets used to his new surroundings, he falls for a girl from the neighborhood (Regina Hall) who has her own plans for moving up in the world. Malibu's Most Wanted was inspired by a character Jamie Kennedy created for his sketch comedy series The Jamie Kennedy Experiment. ~ Mark Deming, Rovi

Bigg Steele
as Himself

Drop Da Bomb
as Himself

Hal Fishman
as Himself

Michael Quill
as Mike the Reporter

Sarah Thompson
as Krista the Barista

Young Dre
as Himself
View All

News & Interviews for Malibu's Most Wanted

View All Malibu's Most Wanted News

Critic Reviews for Malibu's Most Wanted

Dumb movie, but some funny moments for teens.

Most Wanted isn't aiming for social commentary, but it isn't too difficult to enjoy its good-natured humor.

Jamie Kennedy's B-Rad is based on a character from his TV show -- and as the centerpiece for a sketch, he's hilarious. But the B-Rad joke wears thin when stretched across a feature-length film.

Malibu's Most Wanted has less than zero to offer, humorously or otherwise, on the state of hip-hop today.

Wanted isn't quite the real Slim Shady of hip-hop comedies. But you might lose yourself in a few of its amusing moments.

Think of a B-grade Bulworth with lesser talents than A-listers Warren Beatty and Halle Berry.

I was pretty surprised to find this was just so entertaining.

Ryan O'Neal gets more laughs in a few scenes than Chris Rock managed in all of Head of State.

Jamie Kennedy needs to be stopped.

The movie flirts with incisive, witty segments, but it's ultimately yet another anti-inflammatory comedy about racial identity that devolves into a one-joke affair.

Malibu's Most Wanted absconds with a simplistic but imaginative plot and elevates it beyond the realm of sketch comedy into legitimate cinematic territory - for real, y'all.

Not as inspired as White Boyz.

Audience Reviews for Malibu's Most Wanted

The world needs stupid movies. You may be thinking that I'm crazy and that there's something wrong with me. But, bear with me here. Actually, I don't really have a justification for my thoughts on this. I will say, however, that you can make a stupid movie that's actually legitimately good. And by stupid I don't mean like Adam Sandler stupid, the guy has built an entire career on that. I just mean silly movies that rely completely on goofy characters and even goofier situations. You can make a good comedy out of these elements. Undercover Brother (a severely underrated film, in my opinion) comes to mind, immediately. Hot Rod comes to mind as well. Wet Hot American Summer is another. I digress, the point is that it can be done. This brings us to this movie. Admittedly speaking, prior to watching this, I was expecting to hate it. I had seen it once before, like when it first came out on DVD, but it's been over a decade since then and I, really, have absolutely no recollection of this movie whatsoever. I don't remember if I hated it or if I liked it. I remember some scenes, but not enough to make a real determination on it. Having said all of that, and the fact that I've never been the biggest Jamie Kennedy fan, this movie was actually surprisingly decent all things considered. Yes, this movie looks, and reads, like an unmitigated disaster. A wanna-be white rapper, from the tough streets of Malibu, bringing embarrassment to his father and his campaign for governor, finds himself in the real 'hard streets' as it were. These two actors, hired by Brad's father's campaign manager, attempt to play these gang bangers in order to scare the white out of Brad. Again, it sounds kinda awful and not necessarily racially sensitive. But, in execution, the movie has some entertaining scenes and good ideas to play with to be sure. I will say this right out of the gate, Jamie Kennedy, in all honesty, is really kind of annoying in the role of B-Rad. But it's an endearing sort of annoying. I don't really even know how to explain it. Sort of like a Steve Urkel type, except I find Jaleel White more likable than Jamie Kennedy. I'd like to compare Kennedy's performance to Sandler's performance as Jill in Jack and Jill or his performance in Little Nicky. Those are the types of annoying performances that you just wanna go through the screen and just strangle Sandler. Kennedy doesn't ever come close to reaching that level here. I'm not saying he's hilarious in this movie or anything, like I said he's still somewhat annoying, but it never reaches Sandler levels and that's all I can ask for. The character of B-Rad, honestly, feels more suited to a sketch show, which Jamie Kennedy had around this time as well. So it wouldn't surprise me if this character originated there and they found the character so entertaining that they felt it'd be a good idea to give him a full-length film. That's never a good idea, as characters who originated on sketch shows have a sketchy (heh) track record when it comes to basing feature-length films around them. A lot of the best stuff really happens in spite of Jamie Kennedy. I found Taye Diggs and Anthony Anderson to be the best part of the entire movie. Their chemistry is excellent and they really did make me laugh quite a bit in some scenes as these actors who are in way over their head playing gang bangers. The film has some interesting ideas about the roles black actors and actresses usually play, but those are, really, only limited to one scene where Sean laments the fact that he's still getting the same roles as a gang banger. The movie also plays with cultural appropriation but, again, it's relatively minor in the long run. The film is more about being true to who you are, regardless of who that person may be. So, at least, it's a good message, even if I would have used another character to tell this story. I don't wanna say the movie is good, because it's not, but it's better than I could have expected. I'm sure most movie nerds will hate this, but I was perfectly fine with it. I'd even recommend it if you're in the mood for something that's rich in silliness. Not a perfect movie, for sure, but it's perfectly decent with some entertaining scenes.

Jaime Kennedy's magnum opus about a white kid/wannabe/ghetto hood makes valid social commentary while garnering a few chuckles. Its point is made by the fact that everyone by now knows a least one somebody "keepin it real!" who really ain't, but don't know it yet.

"Don't be hatin'" A senator arranges for his son, a rich white kid who fancies himself black, to be kidnapped by a couple of black actors pretending to be murderers to try and shock him out of his plans to become a rapper.

REVIEW
Great premise, but they managed to muck it up. This flick was big on stereotypes; small on imagination. A lot of the humor was sophomoric and crass; indicating a not- too - mature writing staff. Some adult supervision would have greatly enhanced this predictable bore. The casting was great - all the main characters were quite capable and the movie did have its moments. Jamie Kennedy had the rap-wannabe dialect down. The movie quickly became bogged down with racial stereotyping, however: hostile blacks, lots of guns, women as sex objects. This film had lots of potential - it just needed some direction and, in the end, originality. The word "bitch" was used so frequently as it would indicate that the script writer received royalties for it. "Bitch", "bee-och"; it quickly graduated from offensive to nauseating.

This movies hilarious! It's 100% worth watching.