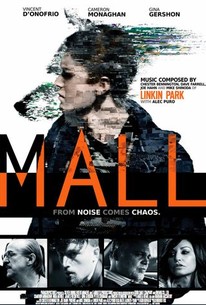 The lives of five disaffected suburbanites come together at a shopping mall in the wake of one man's shooting spree. (c) Official Facebook

The biggest problem with Hahn's film is that it is incredibly hard to tell whether the movie glorifies the violence perpetrated upon innocent people, or if it condemns it.

[T]he real pleasures come from considering the deeper layers, and from the oldschool nods to grindhouse sensibilities and psychedelic theater.

Joseph Hahn is best known as a musician with the band Linkin Park, and after directing a ton of music videos, he decided to give movies a shot. His first film, Mall, is kind of like a car wreck on the side of the road, in that it's horrible, but for some reason you can't look away. It's a seemingly normal day at a normal mall, and five friends are just hanging out, looking for something to do. Everything is pretty normal until a strung out shooter opens fire, but instead of fleeing, the teens decide to hang out and interact with people caught in the aftermath. This is one really strange movie, and as I said earlier, it's pretty bad, but for some reason I couldn't tear myself away from it. Shameless's Cameron Monaghan stars and was really fun to watch. I've always been a fan of his work and find his character, Ian, to be the most interesting one on Shameless. Mall is a different role and different character, but Monaghan is still able to bring that same charisma to the role and made this film somewhat more enjoyable for me. He really has a gift, at the turn of a switch this kid can go from sweet, to sexy, to evil, thanks to a very unique talent and you heard it hear first, this kid is going places. That being said, I tend to think he would be wise to leave this film off his demo reel, as it is just super strange and anti-climatic. Once you start watching Mall, you won't be able to stop. You'll see a great performance by Cameron Monaghan, while you sit and wait for any number of things to happen, that never do, making the film Mall just another confusing, artistic, independent film, that is really only fully understood by the person who wrote it.