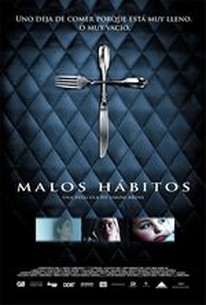 The first feature film from director Simon Bross, the drama Bad Habits shows how a person's approach to food greatly affects one's life. Jimena Ayala plays a nun named Matilde who believes that eating next to nothing will help God stop the suffering of others. She trains pudgy, young Linda (Elisa Vicedo) for her first communion. Linda's mother is an emaciated exercise addict who frets over her daughter's shape. Linda's father, Gustavo, is a libertine who enjoys food as well as a healthy sex life with a mistress. Gustavo, an architect, must figure out why the pipes of a local school are leaking under the strain of a seemingly ceaseless rainstorm.

Thinking man's horror story should have a tasty future.

Taboo topics in a society where "appearance is what counts" is what [director Simón] Bross is all about in a concise, difficult testimony that leaves little to the imagination. [Full review in Spanish]

In Bad Habits (Malos Habitos), a reporter on TV says, "Mexico is drowning." It rains relentlessly throughout the film, creating a mood of gloom and helplessness. The characters are also drowning, emotionally and psychologically, in this vivi

Another great Mexican director, with a personal vision, emerges.

Not many movies can have food as their main subject, and bad habits is all about food! Yes, there is rains too... that aren't enough to wash away the sins of overeating and under-eating... Well executed movie, precise, well-cast debut from director Simon Bross. A lot of irony with well balanced humour mixed with different attitudes toward indulgence and deprivation. Watch it...

This film was terrifying for me to watch, since it showed the exact relationship between my mother and sister. While the film has a good conscience, it drags down a little due to a feeling of repetitiveness.