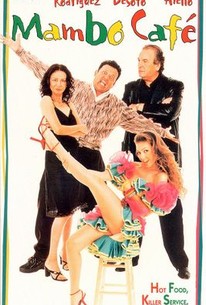 In this comedy, Nydia (Thalia) was born in New York City to a family of Puerto Rican immigrants who run a restaurant. Nydia is on summer vacation after her freshman year at Boston University, and comes home to discover things are not well with the family business; customers have not been coming around, and unless they start coming back, the family will be in serious trouble. Word in the neighborhood has it that Fat Tony (Robert Costanzo), a local Mob boss, is on the outs with his superiors and is expected to be the victim of a Mob hit. Nydia's brother Ricky (Rick Gonzalez) gets an idea -- if Fat Tony gets whacked in their restaurant, the publicity would be invaluable, so he invites Fat Tony to dine there every day on the house. Fat Tony takes Ricky up on the offer, and sure enough, Fat Tony becomes the victim of a Mob hit, with curious crime devotees packing the restaurant from then on. However, since Fat Tony had been hanging out at the restaurant, some of his former associates get the idea that Ricky had a hand in the double dealings that helped get Fat Tony killed, and soon Ricky gets a visit from some very ill-tempered gangsters. Meanwhile, Nydia has convinced her college boyfriend Chris (Richard Hillman), who studies at Harvard, that she's actually the daughter of a wealthy family from Argentina -- which leaves her with a lot of explaining to do when Chris shows up. Mambo Café also stars Paul Rodriguez, Danny Aiello, and Rosana De Soto.

Ismail Bashey
as Cabbie No. 2

Budd Friedman
as Goon No. 2

Tony Ray Rossi
as Henchman No. 1

Raymond Serra
as Goon No. 3

There are no critic reviews yet for Mambo Café. Keep checking Rotten Tomatoes for updates!

There are no featured reviews for Mambo Café at this time.