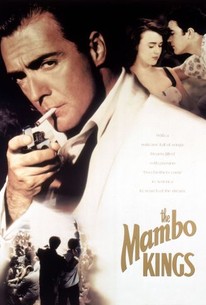 Based on a Pulitzer Prize-winning novel by Oscar Hijuelos, The Mambo Kings are brothers Cesar (Armand Assante) and Nestor Castillo (Antonio Banderas), Cuban musicians who immigrate to New York City to find fame and fortune in 1950s America. After hitting it big on the nightclub circuit, the duo scores a huge chart hit with "Beautiful Maria of My Soul," a song penned by the sensitive Nestor in an attempt to exorcise the spirit of the woman who broke his heart. The hit captures the attention of the patron saint of Cuban musicians, Desi Arnaz (played by his son Desi Jr.), who enlists the Castillos to appear on his I Love Lucy television program. As quickly as the Mambo Kings' star rose, however, it begins to fall; they never again achieve the kind of attention lavished on them following their TV appearance. The doomed Nestor marries a woman named Delores (Maruschka Detmers), but can never shake his love for Maria; compulsive womanizer Cesar loves Delores himself, while his arrogance continually alienates key figures in the star-making machinery.

Tito Puente
as Himself

Vitamin C
as Redhead on Bus

Ryan Howell
as Kid with Basketball

James Medina
as Manny - The Mambo Kings Band
View All

Critic Reviews for The Mambo Kings

Glimcher's movie knows how to let down its hair and live for the night.

It's as if there were a terrible telephone connection between the film's vivid sound track and its tepid romantic melodrama, to which the music is supposed to give style and substance.

Constantly, the movie gives you the feeling of being drastically truncated, with hints of storylines that are never fully played out.

"The Mambo Kings" is so pumped up with life it threatens to burst. It's beautifully filmed and flashily edited. It pulsates with rhythmic ecstasy. It throbs, it sweats, it pounds, it undulates.

In some ways this story is as old as the movies, but "The Mambo Kings" is so filled with energy, passion and heedless vitality that it seems new, anyway.

...a just-good-enough bit of old-fashioned moviemaking.

It is always maddening watching musical 'geniuses' in the cinema when their visibly incompetent efforts bear no relation to what you hear.

No matter what you think about The Mambo Kings (1992) as a whole, if your toes aren't tapping by the time the final credits roll, you might very well be dead.

Terrific music and a boatload of high energy can't quite compensate for a thin plot and weak characterizations....

Audience Reviews for The Mambo Kings