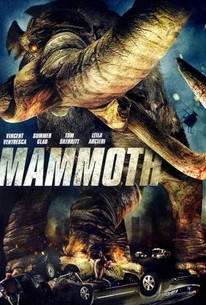 A story of about the rippling effects of life's smallest choices, and the epic ironies that bind us all together. Tom, as successful New York businessman, leaves wife and daughter under the care of a Filipino nanny to go on a business trip to Thailand. As he submerges into a new cultural experience, Tom soon realizes he wants to change his life, setting off a chain of dramatic events.

Nicolae Stoica
as Pat
View All

If you have a high tolerance for less-than-B flicks, you might find Mammoth worth a look. If not, then you're better off with a back-to-back movie marathon of Dumbo, Alien, and Night At The Museum.

Probably one of the more worse SyFy films out there. Wow, this one was bad!

The Sci-Fi Channel presents one of it's finest movies. It actually looks pretty darn good in terms of cinematography. The casting of Skerritt and Glau also allows for some pretty respectable acting. Mammoth knows when to poke fun at itself, and has some of the best dialogue you're ever likely to hear. "God is for Sunday Frank. Today we pray to Nike! RUN!" The CGI is also pretty endearing, never fully convincing, but you believe the actors can see the thing and it doesn't detract from the film. A perfect mixture of B-movie brilliance and badness.

"There's an alien-posessed mammoth on the loose, and if we don't stop it the Government'll kill us all!"

I'll be completely honest here. My main reason for watching and hoping to like this film is Summer Glau. I guess actors pick lower then average movies sometimes, and this happens to be Summers.

This is a sci-fi original movie, yet it is a little different from what you may expect. Yes, this movie isn't all that great and it is made for TV, but I give director Tim Cox just a little credit for lessening the blow a bit. He decides to add a little stupid humor in here with some overacting, which makes this film seem less serious than other sci-fi channel original movies.

The very beginning of this film seems to pop out of nowhere and you can tell that this isn't a blockbuster in the making. Not more than a few minutes go by before the opening credits happen, which will just throw you off. I kid you not. From here on out the story becomes corny. How corny? Let's just say that this could pass as an episode of a cheap Men In Black spin-off.

You will not find a lot of action in here. In fact you won't find a whole lot of a raging mammoth. This is quite disappointing, but it isn't as bad as the cheap CG looking mammoth. I guess you could say that the less mammoth on screen the better.

The acting is OK. Vincent Ventresca overacts, but with the style of the film, it partially works out. Leila Arcieri and Summer Glau look good and do decent jobs. The rest of the cast is crap.

This movie is below average, but if you don't take this movie seriously, it isn't a complete waste of time.