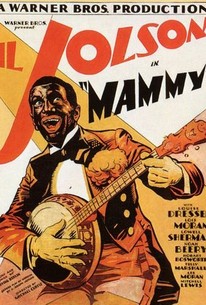 Mammy features Al Jolson as the star of a travelling minstrel show, appearing in a small Southern town. Jolson falls in love with an actress in the troupe (Lois Moran), but she loves another. One of Jolson's fellow minstrels (Lowell Sherman) is shot backstage, and it is assumed thanks to several plot convolutions that Jolson is guilty of the deed. He heads for the hills, but returns to the show, his reputation restored but his love for the actress unrequited. Maudlin in the extreme, Mammy is salvaged by several enjoyable songs by Irving Berlin and by its Technicolor photography (though most TV prints are black and white). The film's fascination with modern viewers rests with the presence of Al Jolson--and with the casual use of profanity during his confrontation scene with Lowell Sherman.

Ray Cooke
as Props
View All

There are no critic reviews yet for Mammy. Keep checking Rotten Tomatoes for updates!

There are no featured audience reviews yet. Click the link below to see what others say about Mammy!