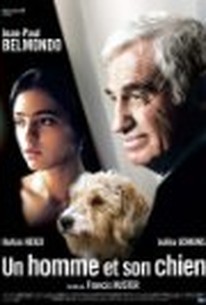 Inspired by director Vittorio De Sica's 1952 neorealist classic Umberto D., Francis Huster's sentimental drama stars Jean-Paul Belmondo as an aged retiree who is forced out onto the street with his dog after his relationship with a wealthy widow falls apart. A cinematic comeback for Belmondo, who previously retired from acting after suffering a major stroke, un homme et son chien tells the story of Charles, an older man who was invited by his lover to stay in the maid's room in her sprawling home. When the woman decides to marry again, however, Charles and his faithful four-legged companion are promptly shown the door. With no place to call home and no means of earning a living, Charles wanders the streets of Paris with his dog as their pair drift towards an uncertain fate.

Michèle Bernier
as Woman on Tramway

Nicole Calfan
as Wife of Man in Hospital

François Perrot
as Man in Hospital

Cristiana Réali
as Woman in Park

Emmanuelle Riva
as Woman in Church

Steve Suissa
as Son of Man in Hospital

There are no critic reviews yet for Man and His Dog (Un homme et son chien). Keep checking Rotten Tomatoes for updates!

There are no featured reviews for Man and His Dog (Un homme et son chien) at this time.