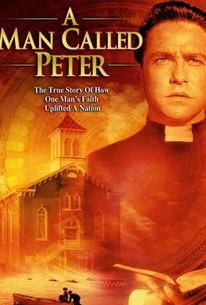 A Man Called Peter is the story of Scottish-born Presbyterian minister and world-renowned author Peter Marshall, here played by Richard Todd. In his youth, Marshall moves to Washington DC, where he becomes pastor of the Church of the Presidents. His wisdom and conviction enables Marshall to communicate with men of all faiths. In private life, the pastor is given moral support by his loyal wife Catherine Marshall (Jean Peters). At the time of his comparatively early death, Marshall has become chaplain of the US Senate. Interestingly enough, while Marshall and his family are identified by name, the peripheral political characters are given fictional monickers--and sometimes, as in the case of the President played by William Forrest, no names at all. Director Henry Koster expertly avoids filming Marshall's sermons in a static, declamatory fashion. As Catherine Marshall, Jean Peters does wonders with a comparatively limited role; her best scene is her last, when she overcomes her lifelong fear of the ocean for the sake of her son (Billy Chapin). A Man Called Peter was certainly not conceived out of any box-office considerations, but it still paid its way. ~ Hal Erickson, Rovi

Ann B. Davis
as Ruby Coleman

Charles Evans
as President of Senate

Steffi Sidney
as Rowdy at Youth Rally
View All

The film is long (two hours) and unashamedly sentimental but it carries immense impact and leaves a warm glow in the heart.

Though decently acted by Tichard Todd and Jean Peters, this biopic of the famous Scottish clergyman and Senate chaplain is directed by Henry Koster in earnest, pious way.

Reverent, sometimes corny bio of Peter Marshall is saved by a strong central performance from Richard Todd. The film also has high production values and a good supporting cast including Jean Peters' swan song before marrying Howard Hughes and retiring from acting for over two decades and then emerging to only do a very few appearances on TV.