The Man from Elysian Fields2001 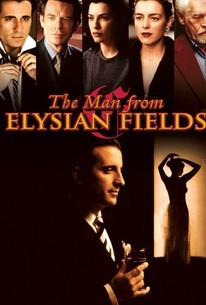 Critics Consensus: This story about a gigolo isn't plausible or compelling enough.

Critics Consensus: This story about a gigolo isn't plausible or compelling enough.

Critic Consensus: This story about a gigolo isn't plausible or compelling enough.

The Man from Elysian Fields Photos

George Hickenlooper directs this psychological drama about an impoverished writer lost in a world of money, power, and male escorts. Though happily married with a young child, Byron Tiller (Andy Garcia) is struggling to make ends meet as a novelist. His last work, called "Hitler's Child," had an ignoble run in the bookstore bargain bins and his editor is not interested in his latest work about migrant workers. One day, he is approached by a dapper Brit named Luther Fox (Mick Jagger) who actually read Tiller's last opus. Luther explains that he runs an escort agency named Elysian Fields, which caters to rich women looking for intelligent companionship. Desperate for any kind of income source, Tiller takes the job while keeping the whole thing a secret from his loving wife (Julianna Margulies). He soon is rubbing elbows with the beautiful wife (Olivia Williams) of an aging Pulitzer Prize-winning writer. Gradually, Tiller finds himself immersed in this strange new world that he cannot quite understand, much less explain to his spouse. This film was screened at the 2001 Toronto Film Festival.

Critic Reviews for The Man from Elysian Fields

Acting is what sustains the unstable plot lines.

The direction, by George Hickenlooper, has no snap to it, no wiseacre crackle or hard-bitten cynicism.

A rare comedy of manners, witty, wicked and worldly, and one of the best movies of the year.

Moves in such odd plot directions and descends into such message-mongering moralism that its good qualities are obscured.

A pointed, often tender, examination of the pros and cons of unconditional love and familial duties.

What really sneaks up is how involved one gets into these characters and their complicated relationships.

It mixes banality with literature and comes up with a pap concoction.

The tone keeps a marvelous balance between intelligence and pity.

Best of all is Garcia, who perfectly portrays the desperation of a very insecure man.

...a trashy little bit of fluff stuffed with enjoyable performances and a bewildering sense of self-importance

Audience Reviews for The Man from Elysian Fields

A mature and worldly screenplay is executed by actors giving elegantly crafted performances. Garcia, Jagger and Coburn all work together (despite Coburn and Jagger never sharing a scene). It's the way actions affect others and how ones own selfish desires can make or break a person. The men not only assert their power to gain wealth and acceptance but are also exploited by their female counterparts. All characters evolve and learn life lessons without the screenplay coming across as a self help novel. Emotional and funny only hampered by a surprisingly uninspired montage and an ending that feels to happily rushed.

Plays out better than it sounds, due to the cast.

The Man from Elysian Fields Quotes