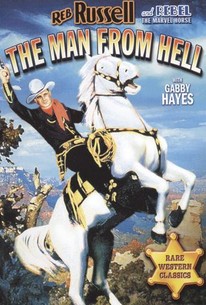 In his first western, former football star Reb Russell plays Clint Mason, a young parolee returning to Bonanza City intent on proving that he was framed in a stage holdup. The sheriff (Murdock MacQuarrie) tends to believe the youngster but is hamstringed by the local marshal (Jack Rockwell), who is in the pocket of town czar Rance McCloud (Fred Kohler). The latter threatens to destroy Colonel Campbell (George Hayes) unless his daughter Nancy (Ann D'Darcy) agrees to marry him. But Clint has learned that McCloud is really Kelso, an escaped convict, and the villain is forced to flee into Mexico with Nancy.

Critic Reviews for The Man from Hell

There are no critic reviews yet for The Man from Hell. Keep checking Rotten Tomatoes for updates!

There are no featured reviews for The Man from Hell at this time.

The Man from Hell Quotes