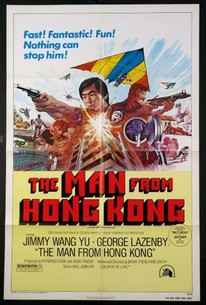 The Man from Hong Kong (The Dragon Flies) Photos

The Far East and the Land Down Under are about to have a head-on collision in this action drama. Fang (Jimmy Wang Yu) is an undercover detective from Hong Kong sent to Australia to crack open the operation of a Sydney mob boss named Wilton (George Lazenby). Fang puts his skills as a hang glider pilot and martial arts master to work as he sets up Wilton for a literally explosive finale. Samo Hung (aka Kim Po Hung), later to become a major martial arts star in his own right, appears in a supporting role and has an impressive battle with an Australian cop. The film also features the song "Sky High" by Jigsaw, which would go on to become a Top 40 hit. ~ Mark Deming, Rovi

Critic Reviews for The Man from Hong Kong (The Dragon Flies)

The Man From Hong Kong's cracking pace tapers over less than stellar acting, and the film holds up well in the context of a chopsocky fun ride.

The Man From Hong Kong is a fantastic piece of cheesy, schlocky fun that has fantastic stunts, a cool hero and villain, colourful cinematography and a light, self-aware sense of humour that makes the film soar sky high.

It's great fun and one hell of a calling card as the debut feature from the man who would become Australia's action king.

The Man From Hong Kong is a rare success, both in terms of blending Eastern and Western action styles and of providing a snapshot of how no-holds-barred Aussie cinema was at the time.

The Man From Hong Kong is a ballsy film also because of the inventive and uninhibited approach to storytelling, the death-defying stunts and for its genre-bending approach to the Asian martial arts flick.

Audience Reviews for The Man from Hong Kong (The Dragon Flies)

A great excuse for great stunts and crazy action. I mean the people and vehicles involved in this film are superhuman in durability and stamina that ends up making for some incredible sequences. Of course the scenes in-between the action are very good, but their frequent laughability, and oh did I mention the action, make up for it. Plus: where else are you going to see the One-Armed Swordsman go after James Bond, with the help and hindering of the Toecutter and Fifi from Mad Max.

The Man from Hong Kong (The Dragon Flies) Quotes