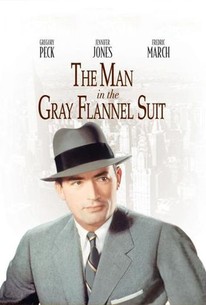 This meticulous and unusually long cinemadaptation of Sloan Wilson's best-selling novel The Man in the Grey Flannel Suit stars Gregory Peck as an ex-army officer, pursuing a living as a TV writer in the postwar years. Hired by a major broadcasting network, Peck is assigned to write speeches for the network's president (Fredric March). Peck comes to realize that the president's success has come at the expense of personal happiness, and this leads Peck to ruminate on his own life. Extended flashbacks reveal that Peck had experienced a torrid wartime romance with Italian girl Marisa Pavan, a union that produced a child. Peck is torn between his responsibility to his illegitimate son and his current obligations towards his wife (Jennifer Jones), his children, and his employer. Among the many life-altering decisions made by Peck before the fade-out is his determination to seek out a job that will allow him to spend more time with his family, even if it means a severe cut in salary. The superb hand-picked supporting cast of The Man in the Grey Flannel Suit includes Ann Harding as March's wife, Keenan Wynn as the man who informs Peck that he'd fathered an Italian child, Henry Daniell as a detached executive, and an unbilled DeForrest Kelley as an army medic (who gets to say "He's dead, captain"!) ~ Hal Erickson, Rovi

Critic Reviews for The Man in the Gray Flannel Suit

As the broadcasting tycoon, Fredric March is excellent, and the scenes between him and Peck lift the picture high above the ordinary.

Relentlessly envelops every idea, obscures every issue in a smug smog of suburbinanity.

A mature, fascinating and often quite tender and touching film.

The film may seem mediocre now (it did back then), but it probably speaks volumes about the period, and Bernard Herrmann composed the score.

Although The Man in the Gray Flannel Suit is noteworthy, then, for its intentions and the clarity of its exposition, even, to a certain extent, for the sincerity of its purpose, it is nevertheless a dishonorable undertaking.

...improves considerably as it progresses...

A surprisingly engrossing, if shallow and overlong, Hollywood vision of 1950s thirtysomethings, with Peck turning in a dignified title role.

But the film is so reductive, so often substitutes subtlety with theatrical gravitas, and so transparently stacks the deck in favor of a preordained outcome that it threatens to become a buttoned-down Reefer Madness for the corner-office set.

An overly long movie that really doesn't have enough plot to sustain its running time, but is largely rescued by Peck's excellent performance, and the supporting cast.

Audience Reviews for The Man in the Gray Flannel Suit

High toned soaper that does interesting stuff, especially involving post-traumatic stress syndrome. A vet returns to civilian life and is comfortable more or less, only his wife (cast as sort of a villianess: Jennifer Jones in an excellent portrayal) wants more, "... a bigger house, more money, some status wouldn't hurt, and why aren't you going out to get all that for us??? Maybe its cause you lost yer balls in the war!" Ouch! There's a couple of side plots as well; the romance in Italy with the other woman, the boss who sacrifices everything for the company and wants Peck to do as well, which are not bad. The overall treatment of the characters and the subject keeps everything from parody.

There are a lot of good actors in this movie, and the story is realistic, but it's so realistic that it's boring and uninteresting most of the time. It's okay, but it could have been a lot better.

Well acted but very dated in its attitudes.

This is a classic film that hardly anybody knows about (like most classic films nowadays.) Gregory Peck stars as a family man whose luck is down despite having a loveley wife and three incredibly loving children. Their middle-class lifestyle is becoming stifling in the years following WWII, and his wife's pressure for having "more" is making him eager for a change. What follows is a series of hurdles that Gregory must pass in order to become fulfilled. He begins work as a public relations executive for a New York television network. His ideas a fresh and innovative and catch the attention of the station's owner and head honcho--a merciless, yet somehow kind-hearted--Fredric March. Peck ideals are put to the test as he must soon choose between his opportunities for advancement at work and his opportunities for a normal life at home. Thrown in here is a subplot of Peck's tortured past as a WWII vet. His night of passion with an Italian beauty and the resulting child that would later come to haunt him and his marriage. His choices aren't easy ones, but this movie has so much heart and style that it makes everything seem so easy compared to problems we deal with today. Definitely watch this if you're a Peck fan. And it's worthy of your time if you like classic movies in general.

The Man in the Gray Flannel Suit Quotes