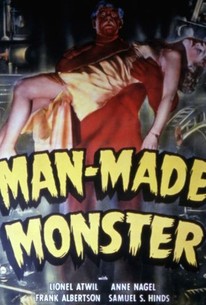 Lon Chaney, Jr. made his science-fiction debut in this B-picture, the story of a sideshow freak--the only survivor in a carnival traffic accident--who becomes immune to electricity. Abused by a mad scientist trying to develop a super race, the freak becomes a zombie and kills the scientist's assistant, only to be tried for murder. The film is also known as Atomic Monster.

William B. Davidson
as District Attorney

Douglas Evans
as Allen
View All

Chaney brings pathos to his role, supported by fine makeup and visual effects.

It was fun but far to generic to warrant a re-watch, and due to this, it gets a three, but I'd recommend you give it a watch if you have an hour and nothing else to do...

Every aspect of Man Made Monster is perfect for what it sets out to be.

There are no featured audience reviews yet. Click the link below to see what others say about Man-Made Monster!