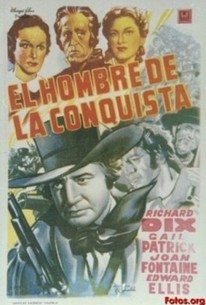 Man of Conquest was the first "super production" from Republic Pictures, a studio not known for its lavish budgets. This time, however, no expense was spared in recreating the career of Texas empire-builder Sam Houston. Richard Dix portrayed Houston, heading a gigantic cast of character players impersonating such historical figures as Jim Bowie, Andrew Jackson, Davy Crockett and General Santa Ana (who is depicted as a Hitler-like oppressor!). The film's two major highlights are the Battle of San Jacinto and the siege of the Alamo, both featuring the remarkable stuntwork of Yakima Canutt. Though often juggling facts to make a better story, Man of Conquest is an impressive achievement for so small a studio as Republic. Stock footage from the production would show up for years in the studio's more economical westerns and serials.

Critic Reviews for Man of Conquest

Satisfactory from every angle and grips throughout.

It is the kind of big idealistic middlebrow epic that America does very well.

Audience Reviews for Man of Conquest

There are no featured audience reviews yet. Click the link below to see what others say about Man of Conquest!