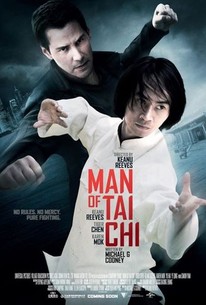 Critics Consensus: It may not be groundbreaking, but Man of Tai Chi represents an agreeably old-fashioned picture for martial arts fans -- and a solid debut for first-time director Keanu Reeves.

Critics Consensus: It may not be groundbreaking, but Man of Tai Chi represents an agreeably old-fashioned picture for martial arts fans -- and a solid debut for first-time director Keanu Reeves.

Critic Consensus: It may not be groundbreaking, but Man of Tai Chi represents an agreeably old-fashioned picture for martial arts fans -- and a solid debut for first-time director Keanu Reeves.

Set in modern Beijing, MAN OF TAI CHI marks Keanu Reeves' directorial debut. The film, also starring Reeves, follows the spiritual journey of a young martial artist (played by Tiger Chen) whose unparalleled Tai Chi skills land him in a highly lucrative underworld fight club. As the fights intensify, so does his will to survive. (c) RAdius-TWC

He Jun
as Liu Gi (Crane)

Tan Wei Ya
as Mr. Chen

Keanu Reeves makes his directorial debut in a cartoonish kung fu movie with splashy fight scenes and an underdeveloped wit.

The concoction works, despite -- or maybe because of -- its unjaded, fantastical familiarity.

Don't get too hopeful for greatness, but the damned thing works.

[An] ambitious but generic martial-arts movie.

An entertaining genre movie that pays tribute to the past with a traditional story about honor and the discipline of martial arts.

"Man of Tai Chi" won't blow your mind, but it is a well put together piece of fun for fans of old school martial arts cinema.

Fans of martial arts flicks, despite some choice sequences, will most likely be disappointed.

In the generally impoverished world of early-'10s action cinema, it's an absolute gem, however tarnished.

Needless to say, The Keanu hasn't got a patch on either Fincher or Assayas stylistically, and while his casting of himself as the eeeevil villain may have been a bold move, his performance could be a career-worst.

If you watch this bilingual martial arts movie for its fighting scenes, you will have plenty to enjoy, for they are really great, but apart from that it is quite forgettable and has nothing else to offer, with Keanu Reeves directing it with no passion and playing a cartoonish villain.

The first film of 2013 set in the Far East starring Keanu Reeves, his second Asian film came out a month later (in the US). This film is based loosely on the real life events of the main lead Tiger Chen (yep that's his real name). Presumably the story is similar to his actual life in the sense of trying to show or promote how Tai Chi can be a martial art, not that he entered an illegal underground fight to the death circuit. Or maybe he did who knows. Yes that's your plot right there, a simple humble man is lured into an illegal underground fighting ring with the promise of getting paid lots of dosh. He needs this dosh to help save his Masters temple which is in ruin. The reason he was chosen is because he is a skilled fighter in the art of Tai Chi which is unusual. This ring is run by a mega rich Keanu Reeves and his entourage who sets these fights up for other mega rich people to enjoy, oh and the cops are after them too. So its the most unoriginal overused plot formula you could possibly decide on. I gotta be honest most of the fights in the film aren't very vicious or hard hitting. They all of course look fantastic and are well choreographed but they all come across like a martial arts ballet, a rehearsed spectacle rather than some gritty illegal underground fighting ring. You can clearly see that moves aren't making full contact at times and when they do its obvious its not real. You can see them going through their fight routine basically, it doesn't feel real or in any way brutal. Another issue I had was the fact Tiger is a pretty small slim fella, he's not exactly the type of person you'd think could knock out all these other fighters. I know a persons size doesn't necessarily mean they can't fight but there really isn't that much of Tiger and some of the other western fighters were pretty well built!. The black fighter he comes up against was three times his size! height wise and muscle width wise. I hate to use this term but the fights do feel like a videogame at times, each fighter having their different styles and outfits, its all very cliched and feels like 'Bloodsport' but without the blood. I guess the only difference with this film is the fact its not some big tournament ala Mortal kombat. Although that being said, the lines 'finish him!' and 'fight!' are used on a regular basis sooo. The one thing that did have me at polar opposites was the use of Keanu Reeves. Reeves directed the film so he's given himself the tasty bad guy role, OK that's understandable, I would do the same. But was Reeves right for the role? debatable, I think this is the first time I've seen Reeves as a bad guy which was a nice fresh change and in all honesty he's actually quite eerie and cold so kudos. What I didn't like was the utterly predictable hokey ass finale where Tiger ends up fighting Reeves who is of course some master fighter. Its very clear Reeves can't fight all that well as his movements are very slow, heavy handed and jerky. He can do some of the moves sure but its obviously not fluid like a true martial artist and this simply makes the final fight a bit of a joke. Tiger has defeated all these top grade super fit fighters but he struggles against Keanu Reeves...ahem. There is nothing here you haven't seen before really, a simple traditional man corrupted by an ultra wealthy bad guy, corrupted by power and money...but not girls this time. Will Tiger see the light and follow in his masters footsteps? what do you think. Lots of fancy visual flair but a bit shallow in the long run.

No rules. No mercy. Pure fighting. Very Good Film! I must say, this movie portrays everything Tai Chi teaches us about ourselves, our inner demons, and how easy it is to loose yourself once you achieve Power. How Control is even more important then simply having great power. Although being promoted as a 'kung-fu movie', Man of Tai Chi is much more than that. It's a meditation on many aspects and trappings of today's life. But none of them are spelled out in neon letters; it's up to the audience to recognize them. All in all, it's like... a Chinese menu: there's something in it for everyone, but some of the dishes are not everyone's favorites... The movie's greatest strength was the amazing cinematography of each action sequence. I love how I can identify each style of fighting and enjoyed the clarity of each strike, grab and throw. I'm glad its not deep which is what i like in an action flick, because i don't want to work that hard when i'm already too exhausted just following the punches thrown in this film. But its a joyride and a spectacle to savor from beginning to end. Tiger Chen is a Tai Chi student who is rather rebellious and uses Tai Chi to fight despite his master's concerns. When the temple where he studies get threatened from modern redevelopment, he fights in an underground fight club to get money the temple needs. However he soon realizes that his employer has other negative motives.

A wickedly cool and visually dazzling martial arts thriller. Director, and Co-Star, Keanu Reeves delivers a fierce and sensational directional debut filled with spectacular fight sequences. Reeves does not give a great performance at all, in fact its one of his worst but he does deliver in some weird way and does sell the bad ass side of his character well and this is a brilliant effort for him as a film maker and shows he can have a promising career as a director. Tiger Chen is very compelling in his role and demonstrating outstanding physical commitment to the action scenes. It's stylish, smart, gripping and action-packed. One of the best and coolest martial arts action flicks since The Raid.