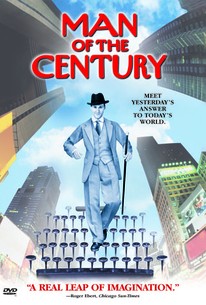 Johnny Twenties (Gibson Frazier) is a man who lives up to his name; from his snazzy suits to his snappy lingo, Johnny is a walking embodiment of the era when liquor was illegal, swing was being born, and the movies were just learning to talk. There's just one problem -- Johnny is living in New York City in the late 1990s, and he seems to have no idea that he's a man out of his era. When not courting his girlfriend Samantha (Susan Egan), who's not sure what to make of her beau's time-warp personality, Johnny does battle with a vicious gangster and his thugs. Man of the Century was written by leading man Gibson Frazier and director Adam Abraham, and features supporting performances from comic/impressionist Frank Gorshin and jazz pianist Bobby Short. The film was shown at the 1999 Slamdance and South by Southwest film festivals.

Critic Reviews for Man of the Century

Man of the Century is a peculiar delight, a one-of-a-kind movie that was obviously inspired by their love of old movies.

A thin gimmick to be certain, but at a tick or two under 80 minutes (!), this amiable comedy never wears out its welcome.

Audience Reviews for Man of the Century

There are no featured audience reviews yet. Click the link below to see what others say about Man of the Century!

Man of the Century Quotes