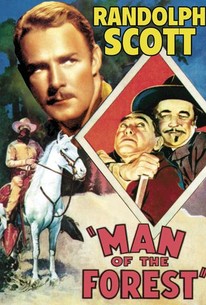 Man of the Forest is based on a Zane Grey story, previously filmed in 1921 and 1926. The title character is two-fisted frontiersman Brett Dale, played by Randolph Scott. Dale gets wind of a plot to kidnap Alice Gaynor (Verna Hillie), the daughter of wealthy rancher Jim Gaynor (Harry Carey) and after numerous obstacles saves the girl from the villains' clutches. Chief heavy Clint Beasley is played by Noah Beery Sr., the epitome of double-dyed villainy. In the film's best scene, long-suffering Mrs. Beasley (Blanche Frederici) begs Clint not to go through with his lust-inspired abduction of Alice, reminding him "We've been married 20 years" -- whereupon Beasley growls "Wall, ya needn't count the last 19 of 'em!"

Critic Reviews for Man of the Forest

It's a ludicrous B Western that fails to be anything but action-packed, charming and dumb.

There are no featured reviews for Man of the Forest at this time.

Man of the Forest Quotes