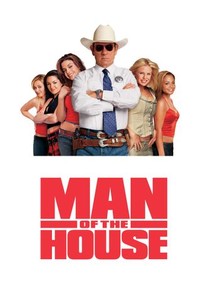 Critics Consensus: A high-concept movie that plays out like a mediocre TV sitcom.

Critics Consensus: A high-concept movie that plays out like a mediocre TV sitcom.

Critic Consensus: A high-concept movie that plays out like a mediocre TV sitcom.

Man of the House Photos

Directed by Stephen Herek, Man of the House follows hard-nosed Texas Ranger Lt. Roland Sharp (Tommy Lee Jones) in an undercover job as a cheerleading coach. Though his assignment is fairly cut-and-dried -- after witnessing the murder of a federal informant, a group of cheerleaders from the University of Texas need temporary protection -- he ends up forming a variety of unexpected and decidedly less simple relationships. Aside from his immersion into the struggles and triumphs of the UT cheerleading squad (Monica Keena, Kelli Garner, Christina Milian, Paula Garces, and Vanessa Ferlito), Roland finds himself dealing with a strong attraction to college professor Molly McCarthy (Anne Archer). Formerly titled Cheer Up, Man of the House also features supporting performances from Brian Van Holt, Shea Whigham, and Paget Brewster.

Cedric the Entertainer
as Percy Stevens

James Richard Perry
as Himself

Critic Reviews for Man of the House

Not too much to cheer about in this lame movie.

The image that best sums up this dismal comedy is Cedric the Entertainer cringing over a cell phone that's been hidden in a cow's rectum.

Anyone who's ever built a shrine to Tommy Lee Jones may enjoy this -- but it would take several troops of cheerleaders to muster up enthusiasm from anyone else.

This makes an even worse job of its premise than you might expect, leaving it to the usual sidekick, Cedric the Entertainer, to provide the occasional laugh as a convict-turned-holy man.

The highlights, or at least breaks from the tedium, come from Cedric The Entertainer.

Overall the film is as static as its star's face which -- given the large amount of scantily-clad female flesh on display -- is really quite an achievement.

Having Tommy Lee Jones spoof his tough guy image isn't a bad idea. Having him spoof his image in a film like Man of the House is a very bad idea.

Although it has its moments (albeit few), Man of the House is primarily a waste of time and a waste of talent (on all fronts).

A guilty pleasure and one I had a very good time with.

Yes, boys and girls, this is a comedy that, in the year 2005, thinks a montage set to Right Said Fred's greatest hit would be hysterical.

Audience Reviews for Man of the House

A feel-good movie with Tommy Lee Jones acting as a father figure to five ditzy cheerleaders. Not his best effort.

Tommy Lee doesn't really go with comedy (in my opinion) but this movie wasn't that bad. It has some good laughs. And man those cheerleaders are so stupid. Are they really like that in real life? Oh well.

Plot: Tommy Lee Jones=Texas Ranger (stretch). Longhorn cheerleaders= murder witnesses. Tommy Lee Jones + murder witnesses = hilarity when worlds collide. Paper thin plot that fails miserably. Thank god he followed this up with No Country For Old Men or I would have to call him Cuba. A pure shit sandwich kids.

Man of the House Quotes