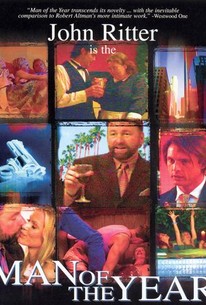 Man of the Year Photos

The brain-child of director and executive producer Straw Weisman, Man of the Year is billed as a reality/surveillance/improv/drama. In fact, the film was shot in one night, with no script and a cast of about 20 being followed around by an equal number of cameras. The story centers on Bill, a successful oil company executive played by John Ritter. At a party in honor of Bill, the audience is introduced to a number of people in Bill's life, including his wife, Carol (Heidi Mark); his bookie, Mickey (Dan Ponce); and his mistress, Vanessa (Khrystyne Haje). As the evening progresses, the mood of the party goes from festive to angry as all of the secrets in Bill's life become exposed, and his life begins to crumble around him. Suddenly, a gunshot is heard, someone is dead, and no one knows who the killer is. Completely improvised based on a loose story outline and a set of predetermined motivations for each character, Man of the Year premiered at the 2002 Method Film Festival in Pasadena, CA.

Critic Reviews for Man of the Year

There are no critic reviews yet for Man of the Year. Keep checking Rotten Tomatoes for updates!

Audience Reviews for Man of the Year

There are no featured audience reviews yet. Click the link below to see what others say about Man of the Year!

Man of the Year Quotes