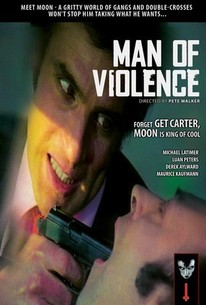 Moon (Michael Latimer) is the mercenary hired to steal 90 million dollars in gold from an Arab country decimated by political chaos. Sex, violence and mayhem accompany the group of double-crossing heavies who covet the purloined loot. Burgess (George Belbin) is the crook who poses as a cop, and Nixon (Derek Aylward) is the criminal who poses as a policeman. A bevy of females willingly submit to seduction, and a sadistic homosexual murderer trails Moon and his malevolent gang for the gold in this uneven crime drama. ~ Dan Pavlides, Rovi

Peter Thornton
as Mike
View All

Critic Reviews for Man of Violence

There are no critic reviews yet for Man of Violence. Keep checking Rotten Tomatoes for updates!

There are no featured reviews for Man of Violence at this time.