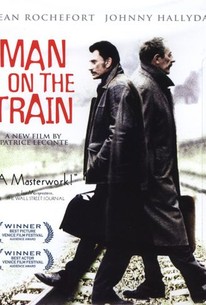 The Man on the Train (L'homme du train) Photos

Two men from two different walks of life develop an unexpected friendship in French director Patrice Leconte's 2002 comedy-drama The Man on the Train. Weary from his trip and in anticipation of the heist he's about to perform, Milan (French rock star Johnny Hallyday) steps off the train after arriving in the small town where he's to meet his co-conspirators and heads straight to the town pharmacy. After accidentally buying the wrong product, Milan makes the acquaintance of retired teacher Manesquier (Jean Rochefort), who offers to help the traveler and then promptly begins talking ad nauseum. Milan, after paying partial attention to the old man's ramblings, excuses himself to find accommodations -- only to run into Manesquier once more after learning that the hotel has closed for the night. As the two men talk, they develop a respect for one another, as well as a secret longing to live the type of lifestyle the other man lives based on the desire to escape their own. The Man on the Train gained positive notice after being selected for competition in the 2002 Venice Film Festival, as well as for the 2002 Toronto Film Festival.

Critic Reviews for The Man on the Train (L'homme du train)

Each actor comes to perfectly embody his character.

Under Leconte's artful direction, a believable bond develops between the men, each envious of the direction the other's life has taken.

It is a perfected fable flashing across a screen.

The actors couldn't be more perfect.

The movie has the kind of texture and depth that will make true movie-lovers sigh with the pure cinematic, human grace of it all.

I'm pleasantly surprised by this crime drama directed by Patrice Leconte. The humor, the dialogues that bear the stamp of sobriety and a very intriguing plot keeps it away from artifice. [Full review in Spanish]

The Man On The Train uses the genre of the crime film to explore the existential crisis of masculinity, and the conclusion it reaches is a similarly bleak affirmation of the codes of heroism.

Laconte's direction is calculative all the way, but his telling fails to register very much.

A bizarre yet touching tale of gangster and recluse finding in each other something they lack, the film definitely warrants a look.

You get the feeling you are watching the adaptation of a classic novel, when in fact the script is an original work of impressive poetry and unpredictable dialogue...

Audience Reviews for The Man on the Train (L'homme du train)

A very delicate film, but it works.

The Man on the Train (L'homme du train) Quotes