The Man They Could Not Hang1939 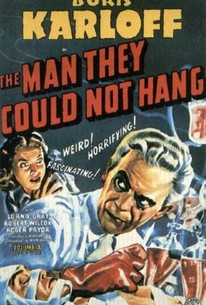 The Man They Could Not Hang Photos

A scientist's greatest invention proves to be his darkest curse in this thriller that was part of Columbia and star Boris Karloff's "mad doctor" series. Karloff stars as Dr. Henryk Savaard, a brilliant heart expert who has created a pump that will allow him to place a patient in a state of death so that vital organs can be replaced with few problems. His first experiment on a human quickly goes awry when his nurse Betty (Ann Doran) sends for the police. The experiment is interrupted leaving the young man dead and Savaard in jail. He is sentenced to hang, but unleashes a bitter diatribe against his executioners promising to avenge his death. After his hanging, Savaard's assistant, Stoddard (Joseph DeStefani), hooks up the corpse to the heart pump and resurrects his boss. Several months pass and a local reporter (Robert Wilcox) discovers that six of the jurors in the case have mysteriously committed suicide -- all by hanging. The newsman's investigation leads him to follow the judge, the prosecutor, nurse Betty, and the surviving jurors to a specially arranged meeting at Savaard's former home. There, they are stunned to discover that Savaard is not only alive, but planning to execute them one by one every 15 minutes. As the bodies quickly begin to pile up, it is through the one person close to Savaard's heart that they can hope to make it out alive. ~ Patrick Legare, Rovi

Critic Reviews for The Man They Could Not Hang

If you don't know Mr. Karloff by this time, we will explain: He is the man whose funerals are never final. You lay a wreath on Boris in one corner and he is certain to appear in another, full of obscure, graveyard resentment.

Another dash Into medical research by that busy savant, Boris Karloff.

The B-film story might be weak, but Boris Karloff gives a strong performance.

Works quite well, even though the mayhem doesn't get all that far.

Audience Reviews for The Man They Could Not Hang

This movie is unbelievable and kind of silly, but I liked it, it was a fun mad scientist movie with Karloff. There was really good suspense and a good actors.

The Man They Could Not Hang Quotes