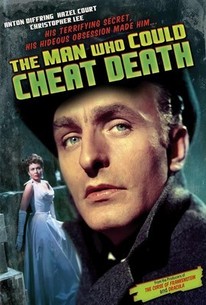 The Man Who Could Cheat Death Photos

After emerging as a potent force in the genre with Horror of Dracula, Hammer Films added their handsome Gothic touch to this lesser-known remake of the 1944 suspenser The Man in Half Moon Street (itself adapted from a play by Barre Lyndon). Anton Diffring stars as a century-old artist who maintains a youthful appearance by regularly replacing certain glands -- in transplants that he receives thanks to the unwilling participation of healthy donors. Despite his outward physical vitality, his advanced years lead to an increasing mental instability, evinced by his mad obsession with an old flame (Hazel Court) whose newfound love for a suave doctor (Christopher Lee) compels Diffring to commit acts of diabolical cruelty that ultimately become his grisly undoing. Directed by Hammer regular Terence Fisher, who applies a high polish to this atmospheric period thriller. ~ Cavett Binion, Rovi

Critic Reviews for The Man Who Could Cheat Death

Diffring is strong in the lead, showing a side to his talents that he would rarely have the chance to use again.

very much in the mold that elsewhere was doing wonders for Hammer Films. You do not need to be a fan of Hammer Films to like this movie, but it certainly helps.

A great movie and a must for British horror fans.

Audience Reviews for The Man Who Could Cheat Death

The truth is revealed early on leaving nothing much for the rest of the film.

This movie does have good actors, but the story is too familiar and the movie is too slow and boring.

The Man Who Could Cheat Death Quotes