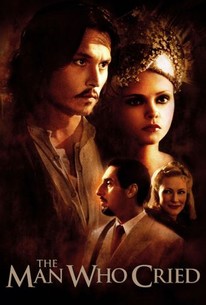 Critics Consensus: The storyline is overwrought and awkward, and the audience is distanced from the flatly drawn characters.

Critics Consensus: The storyline is overwrought and awkward, and the audience is distanced from the flatly drawn characters.

Critic Consensus: The storyline is overwrought and awkward, and the audience is distanced from the flatly drawn characters.

The Man Who Cried Photos

In this historical drama with music, a gifted singer (Oleg Yankovsky) from a Jewish village in Russia travels to the United States in 1927, leaving behind his young daughter Fegele (Claudia Lander-Duke). Father has promised his family that he'll send for Fegele as soon as he can, but authorities make life hard for the Jewish population, and Fegele is forced to flee with relatives to England. Fegele is adopted by a British family, which renames her Suzie and raises her with little acknowledgement of her ethnic heritage. As she grows to adulthood, Suzie (Christina Ricci) becomes a gifted vocalist and gets a job singing in a nighclub revue in Paris. Before she leaves England, her adopted family presents Suzie with a picture of her father, still believed to be living in America, and she decides she will go to the United States some day and find him. In Paris, Suzie makes friends with Lola (Cate Blanchett), a Russian showgirl in the market for a rich husband. Lola becomes involved with opera star Dante Dominio (John Turturro), and soon both Lola and Suzie are extras in Dominio's company, managed by Felix Perlman (Harry Dean Stanton). As Lola takes up with Dante, Suzie falls for Cesar (Johnny Depp), a poor but handsome gypsy horse trainer. Suzie soon becomes involved with the handsome Cesar, but their happiness proves to be short-lived when the Nazi war machine begins to roll through France. The Man Who Cried was written and directed by Sally Potter, who previously won acclaim for another unusual historical piece, Orlando. ~ Mark Deming, Rovi

Danny Scheinman
as Man in Suit

Anna Tzelniker
as Mother of Man in Suit

Barry Davis
as Man in Village

Michael Mount
as Boy in Cart

Harry Flinder
as Boy in Cart

Danny Richman
as Man in Cart

Victor Sobtchak
as Man at Port

Ahmet Zirek
as Father of Boy

Anna Korwin
as Woman in Sweatshop

Mark Ivaner
as Man in Sweatshop

Alfred Hoffman
as Man in Sweatshop

Bernard Spear
as Man in Sweatshop

Chris Gillespie
as Nurse
View All

Critic Reviews for The Man Who Cried

I prefer to think of this movie as The Critic Who Cried.

It's as though we're being dared not to take the movie seriously, although nothing but the pre-Holocaust setting compels you to do so.

There's only one performer in the movie who looks completely at ease with what he's doing: the horse.

It's as dull as dry dirt.

If [Potter] personally, in her 40s, can go to Argentina and become a tango dancer, then we can't complain about anything that happens to Suzie. Not that we'd want to.

The film brings grace and balance to the traditional Holocaust story.

The Man Who Cried hits all the wrong notes right from the get-go and never relents.

Potter, unlike most, doesn't batter you with what she wants you to feel. As the lyrics of a song, this film is poetry. I suspect it will linger with me long after its details would normally fade. Beautiful.

"The Man Who Cried" should be approached as a classic silent film where the movement and emotion tell the story, with dialogue being used sparingly.

A grand looking film always giving one hope it will come up with something sweeping to say...

Ricci ... can't hold audience interest for more than about five minutes, especially when she's stuck with material as superficial and slow-moving as this period drama.

Audience Reviews for The Man Who Cried

Very linear and forgettable, but also quite harmless and watchable.

This is a fairly basic Nazis = bad film. There's not much in the way of political acumen, and the characters and their storylines never escape from basic types. The acting is good until the characters begin the worst lip synching in film history. Potter's dialogue is fairly stilted, but the art direction and cinematography is good. As a whole, the film needed to escape cliche and take greater advantage of its cast, all of whom are capable of strong, nuanced performances.

Really good movie. Depp and Ricci have a really intsense love scene. Depp tends to look at her longingly for a good 2/3s of the film. But I'll forgive..he's lovely. And Blanchett does a really flighty portrayal of a early 20th century gold-digger. All in all..great story of perserverance with a stellar cast..but honestly...I don't understand the title.

The Man Who Cried Quotes