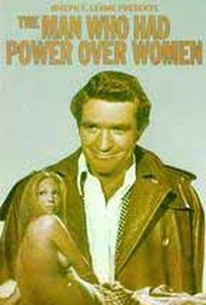 Peter Reaney (Rod Taylor) is the successful talent agent who enjoys the things that money can buy. He also considers himself a parasite, living off the talents of his clients. When his wife Angela (Penelope Horner) walks out on him, he moves in with his friend Val (James Booth) and his wife Jody (Carol White). He and Jody engage in an adulterous affair, but Peter's main worry is doing damage control for the spoiled pop singer Barry Black (Clive Francis). Peter pays off a woman impregnated by Black in order for her to afford an abortion and keep the star's name out of the scandal sheets. Sickened by Black's behavior, he quits the agency and punches out the pop star at a personal appearance. When his friend Val dies, the hard-drinking former agent is free to pursue his romance with Jody in this seriocomic satire. ~ Dan Pavlides, Rovi

Critic Reviews for Man Who Had Power Over Women

There are no critic reviews yet for Man Who Had Power Over Women. Keep checking Rotten Tomatoes for updates!

There are no featured reviews for Man Who Had Power Over Women at this time.

Man Who Had Power Over Women Quotes