The Man Who Haunted Himself1970 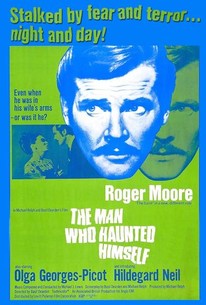 The Man Who Haunted Himself Photos

Basil Dearden's final film is a psychological thriller, adapted from an episode of the Alfred Hitchcock Presents television series. Roger Moore stars as wealthy business executive Harold Pelham, who becomes involved in a terrible car accident. While recovering from his injuries, his alter ego is unleashed and begins to live Pelham's life where he left off. When Pelham returns to his home and his job, he discovers his alter ego has not only undermined his business, but began an affair with a minor acquaintance and revitalized his previously unexciting sex life with his wife. This was Moore's final film before he took over the role of James Bond with Live and Let Die. ~ Paul Brenner, Rovi

Critic Reviews for The Man Who Haunted Himself

The Man Who Haunts Himself maintains interest throughout with its intriguing storyline, although the final moments avoid the perfect ending for one that's slightly less satisfying.

Everyone is British to the hilt, to the point where you may suspect (as do I) that Dearden is having a bit of fun at his countrymen's expense...

Audience Reviews for The Man Who Haunted Himself

Possibly Roger Moore's most atypical and best performance. The film has too little to offer besides Moore, it feels horribly dated (especially by the musical score) and stretched by its uninteresting subplots.

The Man Who Haunted Himself Quotes