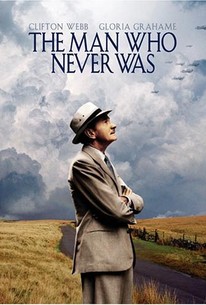 The Man Who Never Was Photos

Adapted from the book of the same name by Ewen Montagu and based on fact, The Man Who Never Was stars Clifton Webb as Montagu, a lieutenant commander in the British Navy during World War II, who becomes involved in tricky scheme to fool the Nazis. It entails locating a corpse, establishing an identity for it as an intelligence officer called Major Martin, and having the body float in the water just off the coast of Spain, with military identificaiton and letters in its pockets that describe a forthcoming invasion of Greece by the British. That invasion, of course, is entirely fictitious, designed to distract the Nazis from picking up on the Britons' plans to invade Sicily. The scheme is complicated by a young woman named Lucy Sherwood (Gloria Grahame), and Patrick O'Reilly (Stephen Boyd), a German espionage agent. ~ Hal Erickson, Rovi

Moultrie Kelsall
as The Father

D.A. Clarke-Smith
as Laurence, a Consul

Terence Labrosse
as Larry
View All

Critic Reviews for The Man Who Never Was

A superior spy thriller, based on Ewen Montagu's true story...

This film is based on a true story, as revealed in a book by Ewen Montagu.

Audience Reviews for The Man Who Never Was

I have to wonder if casting directors of this era intuitively sought out Gloria Grahame whenever a script called for a 'promiscuous' or 'unbridled' sort?

The Man Who Never Was Quotes