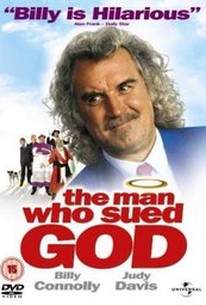 The Man Who Sued God Photos

Directed by Mark Joffe, Australia's The Man Who Sued God centers around Steve (Billy Connelly), an ex-lawyer who is unable to collect insurance money for his destroyed boat. Deeming the accident an "act of God," Steve decides to sue the man at the root of his problem -- namely, God. Anna (Judy Davis), a jaded journalist who took a particular interest in Steve's case, decides to help him out on his quest to collect from the almighty. The movie raises a host of philosophical issues, some of which include who should represent God in court, who pays up should God be convicted, and the status of Steve's eternal soul. The Man Who Sued God also features Vincent Ball and Billie Brown. ~ Tracie Cooper, Rovi

Critic Reviews for The Man Who Sued God

A delicious concept, executed with such panache...it's divine!

Audience Reviews for The Man Who Sued God

The concept is not used efficiently enough.

The Man Who Sued God Quotes