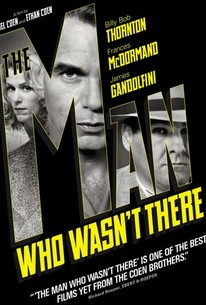 Critics Consensus: Stylish but emotionally distant, The Man Who Wasn't There is a clever tribute to the film noir genre.

Critics Consensus: Stylish but emotionally distant, The Man Who Wasn't There is a clever tribute to the film noir genre.

Critic Consensus: Stylish but emotionally distant, The Man Who Wasn't There is a clever tribute to the film noir genre.

The Man Who Wasn't There Videos

The Man Who Wasn't There Photos

In the summer of 1949, a tale of passion, crime and punishment... Ed Crane is a barber in a small northern California town. Ed is dissatisfied with his life, but his wife Doris' infidelity presents Ed with an opportunity for blackmail that he thinks will help him to change it. However, Ed's scheme unravels and lays bare even darker secrets before leading to murder...

Gregg Binkley
as The New Man

Tom Dahlgren
as Judge No. 1

Booth Colman
as Judge No. 2

News & Interviews for The Man Who Wasn't There

View All The Man Who Wasn't There News

Critic Reviews for The Man Who Wasn't There

Some mature themes--best for older teens.

Affectlessness is not a quality much prized in movie protagonists, but Billy Bob Thornton, that splendid actor, does it perfectly as Ed Crane.

The film holds the interest, to be sure, but more due to the sure sense of craft and precise effect that one expects from the Coens than from genuine involvement in the story.

Joel and Ethan Coen stay true to their bent for dense heroes and neonoir, and to their unshakable conviction that life usually turns out to be splendidly horrific.

Slowly paced for a thriller and with a hero many will find off-putting, this is nevertheless a gripping, unusual and challenging work from the most consistently brilliant filmmakers of the last decade.

In this the Coens' sly script is helped no end by Billy Bob Thornton's supremely eloquent performance as the taciturn tonsor, lent terrific support from Frances McDormand as the wife.

Leave it to Joel and Ethan Coen to not only pay expert homage to the film noir genre, but darn near perfect it.

Thornton's performance is legitimately mesmerising, if only because it's such an unusual anchor to a film.

Much less acidic than Fargo, not as graceful as The Big Lebowsky, and barely enigmatic as Barton Fink, The Man Who Wasn't There is, isn't far from being the best film of the [Coen Brothers]. [Full review in Spanish]

Ed's problem isn't so much that he isn't there but that, when you finally catch a glimpse of him, there's no way to be sure exactly what has caught your gaze.

This stylized black and white noir by the Joel and Ethan Coen is meticulously mounted but too emotionally detached and only sporadically engaging.

Audience Reviews for The Man Who Wasn't There

One of the best commentaries I've seen on the murky condition of what can be deemed as modern man, Thornton (a revelation) plays a guy who is so removed from society, from even himself, that he is, in effect, only a spectator in his very own life. (But what's the point of that? What does that accomplish?) Everyone does a bang-up job, and this is eye opening filmmaking at it's best. Perhaps the best by the Coen Bros.

The Coens capture the look and feel of not only film noir, but that era (late 1940s) as a whole, perfectly with this film. Billy Bob Thornton is great as the laconic, chain-smoking barber Ed Crane, who doesn't have a whole lot to say, and doesn't really do much either. To break out of his achingly dull life Ed decides to get involved with a businessman trying to start up a dry cleaning business. To get the money for financing, Ed blackmails his wife's boss who is having an affair with her. Of course, since this is both a noir and a Coen Brothers film, not all goes according to plan, and nothing is really quite as it seems. This isn't the best film from the Coens, but it's still really good. It's by far their most serious work, but even then, there's still a shred of their trademark dry, dark humor and some really odd characters and weird things going on, mostly a motif involving flying saucers. Heck, even Ed himself is very much an alien with how he really doesn't seem to fit into the world. The most striking thing about this film is definitely the look. Filmed in color, but printed in black and white, this is immediately their most strikingly gorgeous work from a visual standpoint. Unlike some modern films done in black and white, this actually does look and feel like a legit 40s film. It's an impressive job that was done by the production designer, costume designer, and the venerable director of photography Roger Deakins. I could stare at this film all day and never tire of the great images it has to offer. Give this one a shot. It's slow, odd, and deliberate, but a real underrated gem worth looking at. The performances are great, the music is wonderful, and it's just a great love letter to classic noir. Also, the commentary track is amazingly entertaining and funny in its own right.

A beautiful minor key film. The inclusion of some of Beethoven's most beautiful sonatas into this noir really works. Thornton and McDormand are fantastic plus a whole host of supporting roles that are hilarious.

The Man Who Wasn't There Quotes