The Man with the Golden Gun1974 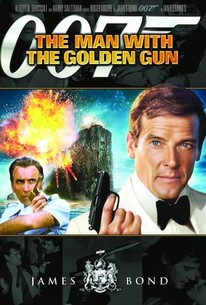 Critics Consensus: A middling Bond film, The Man With the Golden Gun suffers from double entendre-laden dialogue, a noteworthy lack of gadgets, and a villain that overshadows 007.

Critics Consensus: A middling Bond film, The Man With the Golden Gun suffers from double entendre-laden dialogue, a noteworthy lack of gadgets, and a villain that overshadows 007.

Critic Consensus: A middling Bond film, The Man With the Golden Gun suffers from double entendre-laden dialogue, a noteworthy lack of gadgets, and a villain that overshadows 007.

The Man with the Golden Gun Photos

The Man With the Golden Gun, Roger Moore's second outing as James Bond (Live and Let Die was the first), whisks our hero off to Hong Kong, Macau, Thailand, and then the South China Sea in search of a solar energy weapon. His opponent is Scaramanga (Christopher Lee), who rules the roost on a well-fortified island. Scaramanga's aide-de-camp is Nick Nack, played by future Fantasy Island co-star Herve Villechaize. Britt Ekland plays the bikinied Mary Goodnight, whose clumsy efforts to help Bond thwart Scaramanga are almost as destructive as the elusive solar device. The Man With the Golden Gun was adapted by Richard Maibaum and Tom Mankiewicz from Ian Fleming's last James Bond novel, which had to be published posthumously in "rough draft" form.

Marc Lawrence I
as Rodney

News & Interviews for The Man with the Golden Gun

View All The Man with the Golden Gun News

Critic Reviews for The Man with the Golden Gun

Roger Moore is a pastry chef's idea of James Bond; but Christopher Lee as the archetype of the evil antagonist makes this 007 outing just about bearable.

The best Bonds, like the car that twirls, were sly without quite getting silly. The best Bonds also had Sean Connery, whose absence is sorely felt here.

Roger Moore's Bond has got a rough deal over the year, but whilst this takes itself a little too lightly it has a lot going for it.

If you enjoyed the early Bond films as much as I did, you'd better skip this one.

The return of Sheriff J.W. Pepper automatically knocks this movie down a peg or 20.

The Man with the Golden Gun boasts one of the greatest villains in the series; if only the rest of the film lived up to his level.

Moore (in only his second try at Bond) gets to be extremely unconvincing as a martial artist, though somewhat believable as a frequent escaper.

I love Roger Moore. I grew up on him as Bond. But in The Man with the Golden Gun, you can tell he hasn't settled into making Bond his own.

The producers seem intent on destroying a money-making business.

One of the real Bond curios and arguably the most passable Roger Moore entrant to the entire series.

Audience Reviews for The Man with the Golden Gun

I enjoy this particular entry about on the same level as Moore's previous Bond flick "Live and Let Die", some intriguing elements but the final product comes out to be above average. Once again Moore is fantastic and having the awesome Christopher Lee as the villain is genius casting. I also liked how this film played around with the idea of having Scaramanga being an evil-version of Bond. It's just a shame that Lee is criminally underutilized and the plot takes a few too many detours (Ex. The really pointless martial arts tournament sequence). Thankfully, the Roger Moore era of the Bond franchise is about to finally take off in the next entry "The Spy Who Loved Me"!!

"The Man with the Golden Gun" is far better than what the reviews are saying, even though I agree with most of the issues. It may have silly action sequences and some cheesy side characters that are in the film for no reason, but this Roger Moore addition to the Bond franchise is awesome in every sense of the word. The villain is interesting enough, the story is smart enough, and the performances are as good as to be expected. The story in this film is one of the most enjoyable in the series, but it has some of the cheesiest scenes, so I guess it balances out. This James Bond film may not be one of the best in the series, but it has some fun elements to it.

Moore's second outing as Bond is more engaging than the first due to a cheeky script, a better villain, and a more interesting plot.

some great moments, and very entertaining, but the film also suffers from some really silly and nonsensical moments as well. the characters were great, and bonds pursuit of a character that seems designed as the "anti" bond is a great concept, but the escape from the dojo, the reintroduction of sheriff pepper, and the maze room were all a bit too much. a decent bond, but not one of the better entries.

The Man with the Golden Gun Quotes