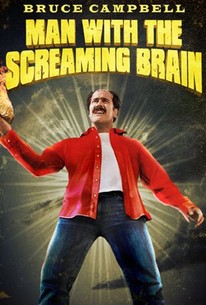 Man with the Screaming Brain Photos

A wealthy industrialist in search of a tax break finds himself at the mercy of a deranged scientist in this surreal comic thriller from Evil Dead star Bruce Campbell. While his overwhelming greed and hawkish business sensibilities have helped to ensure pharmaceutical CEO William Cole (Campbell) a fairly comfortable existence, that doesn't stop the money-minded businessman from traveling to Bravoda with his trophy wife, Jackie (Antoinette Byron), in a bid to diversify his company's holdings. As William heads out to meet with city officials and Jackie gets better acquainted with handsome chauffeur Yegor (Vladimir Kolev), Dr. Ivan Ivanov (Stacy Keach) and his hip-hopping assistant Pavel (Ted Raimi) come close to completing an experiment that may revolutionize organ transplants. When an unfortunate encounter with obsessive hotel maid Tatoya (Tamara Gorski) finds William, Yegor, and Jackie all taken under the care of Dr. Ivanov, a series of transplant surgeries result in both William and Yegor sharing William's body and Jackie's brain being transferred into a break-dancing robot. Now, if William ever has any hope of getting his head back to himself, he and Yegor must use their combined knowledge to hit the streets to find the woman responsible for their deaths.

Jonas Talkington
as Larry the Swinger

Raicho Vasilev
as Radomir
View All

Critic Reviews for Man with the Screaming Brain

The image of Campbell slapping himself to the ground is the only gag that the movie doesn't beat to death.

The film tries very hard to be over the top, wacky and camp, but instead, it's flat as stale O'Doul's.

An unapologetically sloppy jumble of Roger Corman-style antics that could only hope to inspire their own drinking game.

A comedy that doesn't build, lacks structural integrity, and often falls flat. But it's also winningly loopy, with bizarre incidental ideas and performance riffing making for a series of parts that almost make up for the faults of the whole.

A decent and diverting piece of work from perhaps the hardest-working man in movies.

...required viewing for fans of the B-movie superstar.

The story is pretty ridiculous from start to finish, but that's not necessarily a bad thing since the film doesn't take itself seriously at all.

if Sam Raimi is going to keep directing $100 million movies, someone has to keep the B-movie torch aflame.

Cranial scars; a robot in a yellow jumpsuit; gypsy thugs; catfights; Ted Raimi doing hip-hop; a mauve, tasseled Vespa; and a salad bar....C'mon: you know you want it.

Audience Reviews for Man with the Screaming Brain

A great time. One outragiously funny and original movie that has the old school 1950's sci-fi style and material. It packs great laughs, mayham and crazyness. Bruce Campbell brings his great nack for comedy as well as a great directional debut, proving he can handle being the star and crafting his own film.

In this Sci Fi original type movie Bruce Campbell loses all of his good Indie cred by doing his same old tired schtick.

Bruce is alright, but the movie needed some help. These made for sci fi movies should be b movies, but they often aren't good enough to even be that.

Bruce Campbell rocks!!! This is ultimate B-movie cheese, intentional for a change (at least I THINK it's intentional) and as long as you're not expecting Citizen Kane, a lot of fun.

Man with the Screaming Brain Quotes