The Man with Two Brains1983 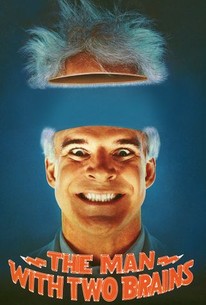 The Man with Two Brains Photos

Steve Martin and Carl Reiner concoct one of Martin's best comic vehicles with Martin playing the world's top brain surgeon, Dr. Michael Hfuhruhurr -- he ought to know, he said so himself. Hfuhruhurr pioneered the radical new cranial screw-top technique, but he grieves over the untimely death of his wife Rebecca, carrying around a small plastic likeness of her to get through the long and lonely evenings. Thinking of her while driving home, Hfuhruhurr takes his eyes off the road and runs down the beautiful but deadly Dolores Benedict (Kathleen Turner). Hfuhruhurr performs surgery which saves her life, but as she recovers, Hfuhruhurr doesn't realize Dolores is a gold-digging vixen who has driven her latest husband (George Furth) to death by apoplexy. She is now looking for a new victim and Hfuhruhurr fits the bill. They marry, but Dolores denies her husband sexual favors, which frustrates Hfuhruhurr to distraction. He takes Dolores on a belated honeymoon to Austria, where he meets fellow brain surgeon Dr. Necessiter (David Warner), who keeps a wide assortment of brains in his laboratory. Dolores takes the opportunity to have an extramarital affair, and when Hfuhruhurr finds out he dumps her. But in Necessiter's laboratory, Hfuhruhurr becomes attracted to Brain #21, Ann Uumellmahaye (voice of Sissy Spacek), with whom he communicates telepathically. At last, here is one case where a man loves a woman for her mind rather than her body (which doesn't exist)! But Ann's brain is deteriorating rapidly; Hfuhruhurr needs to find a body and transplant the brain quickly in order to save Ann. ~ Paul Brenner, Rovi

Adrian Ricard
as Nurse in Room

Estelle Reiner
as Tourist in Elevator

Critic Reviews for The Man with Two Brains

This is not a great comedy but it has scenes that don't know that.

Steve Martin plays Dr. Hfuhruhurr, Kathleen Turner spoofs her star-making Body Heat role, and the Elevator Killer turns out to be the last person you would suspect. And so it goes in this zany comedy.

Even if this isn't Steve Martin's best role or his best film, it holds up pretty well, offering a glimpse of a comic genius at a wonderfully experimental stage of his career.

Steve Martin made his share of bad movies, but sometimes he could pull one out through sheer force of comedic will.

Martin at his zaniest

Sometimes hysterical, but it thinks it's funnier than it is.

Martin's at his wildest and craziest in this seriously silly sci-fi spoof.

Audience Reviews for The Man with Two Brains

Easily the best collaboration between Martin and Reiner in their long movie errm...collaborations. Its Martin's second zany wacky off the wall movie after 'The Jerk' which wasn't as madcap as this. In this work of genius Martin is set free to basically come up with as much lunacy as he possibly can and boy does he. The plot is somewhat sensible I guess, a brain surgeon falls for the sexy Kathleen Turner only to eventually discover she is a gold digger and doesn't give a shit about anyone really. In the mean time Martin falls in love with a disembodied brain (in a jar) and decides to try and rescue it with a new fresh sexy body. The whole idea is basically a B-movie homage to various ridiculous horror concepts and at the same time an influence for many future raunchy trashy 80's teen comedies, it serves dual purpose. Its not exactly a full spoof but it comes close at times, its just an insane comedy with surreal touches of outlandish humour that borders on spoof. Most of the funny moments tend to be sexual innuendo or sight gags, some childish some clever and witty, whilst others are clearly in there just for the hell of it, probably created on the spot. Take Martin's character name for instance...Dr Hfuhruhurr, we here Martin say his name properly right at the start but from then on almost everybody pronounces it differently as they struggle to say it, most just give up. This is such a stupid gag ,its infantile, but it works so brilliantly every time yet you don't really know why. You know its stupid but seeing all the various characters pronounce it so randomly is just so fudging funny. The joke is even extended to a few other characters also, you'd think it would get old but it still manages to make you smile. What hit me was how old the film looked, it was released in 83 but it looks like a 70's flick to me. Everything really looks so dated nowadays but I think some of it is deliberate, made to look cheap like an old fashioned mad scientist movie. Naturally the fake castle laboratory within the apartment (nice switch) is the cheesy stereotypical mad scientist vibe for this kind of thing. I like how they include that simply for that reason and actually say that in the film hehe could almost be a Leslie Nielsen vehicle. Its also easy to forget how hot Turner was back in the day, she smoulders here as the evil temptress or black widow. I also like the various bits of ass on display too (yeah sue me). I do recall watching this as a kid and thinking it was a dirty film, to a kid the material shown is quite kinky and revealing for sure, the dialog is also pretty smutty and only now as an adult do I appreciate it, much like all the humour. This has to be Martin's best film or close to, its such a shame he never really did anymore off the wall flicks like this. There is so much that works here, so many little gags and visual nuggets that are admittedly so daft (the very quick human pinball scene) you just can't help but like it (unless you dislike Steve Martin's style of course). Its rude crazy and predictable (with a brief bit of in your face racism!) but for me its probably one of the best comedies made. 'The only time we doctors should accept death is when it's caused by our own incompetence'

Steve Martin and Carl Reiner concocted this near miss together about a doctor who has telepathy with a brain kept alive in a jar of miracle colored water. Some bits work, some don't, and one remembers the work of Mel Brooks throughout as there are similar styles working. Kathleen Turner has quite a lot to do and she nearly steals the film, but its Martin's baby all the way home. There's a few chuckles in here.

Michael Hfuhruhurr: I am making a citizens divorce. By the powers vested in me, I hereby declare our marriage null and void! Ipso facto, coitus interuptus!  "So funny, you'll laugh your head off" The Man with Two Brains is a decent comedy until Steve Martin starts dating a brain in a jar. I can say I almost liked the movie. It had a few scenes that were laugh-out-loud funny. But then the jokes start getting repetitive; for example with Steve Martin's character name. Every other sentence would be a joke about how no one can pronounce it. It gets old after awhile, especially when the joke wasn't all that funny the first time. This is nowhere near Martin's best(Dirty Rotten Scoundrels, The Jerk) but also nowhere near his worst(Pink Panther, without a doubt). It's somewhere in the middle. It has it's moments, like most of his movies. It's really stupid, like most of his movies. It's also hard to completely hate because everyone involved knows it's stupid and their having a lot of fun making it.  In the end it's an average comedy at best. Kathleen Turner makes it a little more pleasant to watch; even with her playing a bitch. Martin is his normal self, so you know what to expect there. Funny enough, but I don't think you'll laugh your head off.

A weird plot, but for the most part it's pretty funny, and I enjoyed it.

The Man with Two Brains Quotes