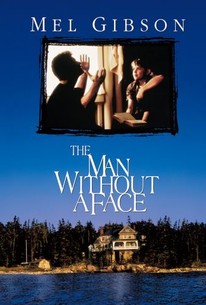 The Man Without a Face Photos

Mel Gibson made his feature film directing debut with this drama, loosely based on the book by Isabel Holland, which combines elements from The Elephant Man, Mask, Scent of a Woman, and The Karate Kid in a study of the capacity for human trust and compassion. Gibson plays Justin McLeod, a former teacher who, after having his face and his body terribly disfigured in an automobile accident, has taken to living alone in a big house in an island off the coast of Maine. McLeod works as a free-lance artist who undergoes the humiliation of being shunned by his neighbors and called "hamburger head" behind his back. McLeod keeps to himself and wants nothing to do with his neighbors. But one day an adolescent boy, Chuck Norstadt (Nick Stahl), comes knocking at his door desperate for a tutor. At first suspicious, McLeod gradually warms up to Chuck and they become pals. But their burgeoning friendship is frowned upon by Chuck's family and the local police chief, Stark (Geoffrey Lewis), apparently because of rumors circulating that McLeod had a record concerning child molestation. This piece of gossip threatens Chuck with the loss of his teacher and a new-found friend.

David A. McLaughlin
as Chuck's Father

George Martin
as Sam the Barber

John B. Guptill
as Chuck's Friend

News & Interviews for The Man Without a Face

View All The Man Without a Face News

Critic Reviews for The Man Without a Face

The Man Without a Face is such a noble, well-intentioned little film that one feels like an ogre picking on it. Alternately poky and melodramatic--and occasionally witty and insightful--the uneven screenplay too often strains credibility.

The movie is Gibson's debut as a director, and shows him not only with a good visual sense, but with what is even rarer, the confidence to know what needs to be told and what can be left unsaid.

Stahl carries the film, with a fine performance balanced on the preadolescent cusp of spontaneity and craft. Once again, the story is about coming of age. Growing up, it seems, never goes out of fashion.

One of the best movies of Gibson's career

Watchable weepie about the importance of books vs. covers.

Mel Gibson does himself proud with the imperfect but noble, and ultimately satisfying Man Without a Face.

Audience Reviews for The Man Without a Face

Two outsiders of society, one a boy thought stupid and the other a burn victim with a criminal record, encourage each other and find reasons to persevere in a misunderstanding world. A quiet and emotional piece that subverts Gibson's characterisation as merely an action hero.

Mel Gibson's directorial debut deals with a familiar territory we have seen in many films - A deformed reclusive befriending a young boy, believing that he has been given a second chance to heal old wounds. But the movie has more to it especially with the revelation of character's dark past. Even with a less than convincing makeup, Mel Gibson delivers a powerful performance as the face burned loner.

This Awesome piece from Mel Gibson factory made me watch it several times.

"Man Without a Face" is one of the very few Mel Gibson movies that you don't ever hear all that much about. That's a huge mystery to me because I thought it was one of his best movies by far, and that's saying a lot after he's made so many great movies such as the Lethal Weapon series, "Braveheart," and many other blockbusters. Mr. McLeod (Mel Gibson) used to be a teacher until he was involved in a car crash and one of his pupils died in the crash. McLeod was rumored to have abused the boy when he didn't do anything. Now McLeod has been living in a town as an outcast for 7 years. He has major scars on one side of his face and he doesn't interact with hardly anybody. However, one day, 12-year-old Charles (Nick Stahl) asks McLeod to help him study for a test that he wants to take to try to get into the military academy. What neither McLeod nor Charles knows at the time is that they're a lot alike. Charles is emotionally neglected and McLeod is an outcast who is all by himself with no friends. "Man Without a Face" is a spectacular movie. In my opinion, I think it's one of the most underrated movies that has ever been made. I think it should be one of the best known and most popular movies ever because it really is a great movie. It's a movie about true friendship and loyalty when the going gets rough. I recommend "Man Without a Face" to anybody that likes watching great movies. NOTE: That was my Amazon review from the year 2000.

The Man Without a Face Quotes