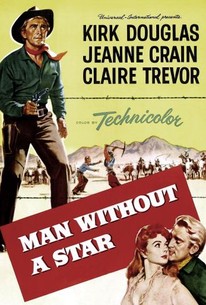 Man Without a Star Photos

In this deceptively titled and paced Western, Kirk Douglas shines in the hyper-macho role of Dempsey Rae, a good-natured drifter with a mysterious past up from Texas, a top hand with a gun, a horse, or a herd, who can even play the banjo and sing. He rides into a Wyoming town in a freight car, in the company of much younger drifter Jeff Jimson (William Campbell), who knows even less about the West than he does about life. Dempsey gets Jeff out of a few scrapes with the law, and both get hired by the foreman (Jay C. Flippen) of the Triangle Ranch. With 8,000 head, the Triangle is already the largest spread in the territory, but the new owner from back east, Miss Reed Bowman (Jeanne Crain), arrives with plans to move in another 22,000 head onto the open range, threatening to squeeze out the smaller ranches completely. Meanwhile, the other ranchers plan on saving some of the grass for winter feed and fence it off with barbed wire. When Bowman discovers that she can't hold onto Dempsey as either a man or a foreman, she seduces Jeff -- who's too quick to become a man -- to run interference on him, and hires a crew of gunmen led by Steve Miles (Richard Boone) to tear down the wire. A range war is about to break out, and Dempsey, who wants no part of barbed wire and carries the scars to show why, plans on pulling out. But then Miles and his men overplay their hand, and Dempsey throws in with the smaller ranchers. The body count suddenly starts going against Miles, who digs in for a final fight, and now it's Jeff and Bowman who find themselves caught between two unstoppable forces that they've helped unleash.

Lee Roberts
as Brakeman
View All

Critic Reviews for Man Without a Star

One of the better westerns. Kirk Douglas appears as a banjo-strumming slugger with a fondness for pretty girls and a hatred for barbed-wire fences. With Jeanne Crain, and other worthies.

Audience Reviews for Man Without a Star

There are no featured audience reviews yet. Click the link below to see what others say about Man Without a Star!

Man Without a Star Quotes