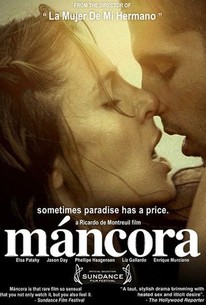 Desperate to escape Lima's cold winter blast after his father's recent suicide, a grieving son finds himself unexpectedly joined by his beautiful stepsister and her domineering husband in director Ricardo de Montreuil's entry into the 2008 Sundance Film Festival. Santiago has just lost his father, and now the last thing he wants to deal with is another brutal winter in Lima. Looking to escape to more picturesque surroundings, Santiago sets his sights on the inviting beaches of Máncura. Just as Santiago is about to leave, however, his stepsister Ximena and her arrogant husband Inigo show up and invite themselves along for the ride. After picking up a wandering hitchhiker on the side of the road, the hard-partying travelers finally arrive at their destination. Once there, however, simmering romantic tensions within the group gradually threaten to boil over.

Angelita Velásquez
as Secretary
View All

Although sexy and scenic, the Peruvian road movie Máncora lacks the heart and soul required to fully invest in its central trio's free-floating journey of self-discovery.

Like a poor cousin to Y tu mama tambien.

A taut, stylish drama...represents a noteworthy sophomore feature from the Peruvian director.

Despite dramatic pretenses, De Montreuil has essentially made a piece of sex-and-sun tourism cinema.

There are no featured audience reviews yet. Click the link below to see what others say about Máncora!