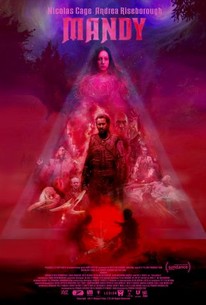 Critics Consensus: Mandy's gonzo violence is fueled by a gripping performance by Nicolas Cage -- and anchored with palpable emotion conveyed between his volcanic outbursts.

Critics Consensus: Mandy's gonzo violence is fueled by a gripping performance by Nicolas Cage -- and anchored with palpable emotion conveyed between his volcanic outbursts.

Critic Consensus: Mandy's gonzo violence is fueled by a gripping performance by Nicolas Cage -- and anchored with palpable emotion conveyed between his volcanic outbursts.

Pacific Northwest. 1983 AD. Outsiders Red Miller and Mandy Bloom lead a loving and peaceful existence. When their pine-scented haven is savagely destroyed by a cult led by the sadistic Jeremiah Sand, Red is catapulted into a phantasmagoric journey filled with bloody vengeance and laced with fire.

Richard Brake
as The Chemist

Hayley Saywell
as Sis
View All

Major Awards Need to Stop Ignoring Incredible Horror Performances
Best-Reviewed Movies by Genre 2018
The Year in Review: The Biggest Stories from the Movies, TV, and Streaming in 2018

I didn't much care for the film, but I can see how it might appeal to gorehounds and fans of genre cinema.

Beautifully-shot film, although sometimes the use of processed grain and lens flares were distracting. The second half was exactly what I wanted, but the first half is a bit slow.

Hyperstylised and ultraviolent, Mandy is an amped-up theological trip into pulp's purest quintessence

It's bloody, it's nasty, and it burns.

As an audiovisual experience, it's certainly entertaining, and perhaps even destined for cult success, but I'm not sure its metalhead aesthetic services much more than mood.

Mandy's heavy metal influences come through loud and clear, not just in the booming soundtrack but in the film's mechanics itself.

A violent, beautiful, deranged, and haunting work of art.

A deeply weird movie, tailored for a very specific grindhouse type of audience, and brought to life by Cage's cock-a-doodle performance.

Mandy's death propels the movie descending rapidly into total mayhem and provides perhaps Nic Cage's Cagest performance in years. That long take rage scene in his underwear in the bathroom is a sight to behold.

Despite its obvious low-budget construction, it's stylish and alarmingly original, while Cage doesn't hold back the rage in his performance.

Mike Massie
Gone With The Twins
View All Critic Reviews (249)

It is incredibly refreshing to see something that looks so familiar and yet so unique, drawing from a number of inspirations from the 1980s with its astounding score and stylish retro visuals full of lens flares and psychedelic colors, like some mix of Mad Max and Hellraiser on LSD.

Films like Only God Forgives or The Human Centipede are bizarre or off-putting, simply to be that, offering nothing else. That's just my opinion, but movies like that can also be absolutely incredible in terms of how a story is told. You can have the most generic premise in history, but still manage to accomplish one of the most original films of the year. Mandy is absolutely for a niche audience, so if you're someone who can watch any movie, no matter how intense, gory, insane, or downright disgusting a film is, then Mandy might impress you, as it did myself. While I'm cautioning this review and stating that the majority of average moviegoers will probably rip this film apart or not even be able to finish it, here's why I believe Mandy is one of the better films of 2018. The plot of this film is a spoiler in itself, so I will keep this very brief, without ruining the experience for anyone. Mandy follows a couple in Red (Nicolas Cage) and Mandy (Andrea Riseborough) as they run their shop in the woods, exploring their love together. As a religious cult is looking around them, their future is not going to be bright together. Filled with gruesome violence, some of the most unique visuals of the year, and a story that gets turned on its head, this is definitely an experience that shouldn't be missed for hardcore film fans. This particular film is anchored by fantastic (although haunting) performances by the members of the religious cult, but the true standout of the film is Nicolas Cage. Yes, fans of his work will get their favourite freakout moments that he's become known for, but it really is a surprising turn for him as an actor. With one scene in particular, his performance brought me to literal tears, due to how committed to this character he was. Through all the wacky moments this character goes through, it was the subtlety in Cage's eyes that had me invested from start to finish. Even though I felt like certain scenes were weird, just to be weird, he helped keep this bizarre film grounded in some sort of reality. As I mentioned, this film is visually striking. Personally, I found some of the visuals to be slightly gimmicky, but the characters surrounding the film easily made up for that. By the time the second and third acts kick into gear, the bizarre visuals become sparse, which felt like a breath of fresh air. Director Panos Cosmatos clearly had a vision for this film and stuck to it from start to finish, which has to be at least admirable. That being said, the best part of this film, at least to me, was the score by Jóhann Jóhannsson. The way music is presented here is almost like it's a character in the film. Even if I may not have been buying into a certain element throughout the first act of this film, the score was pulse-pounding and it truly blew me away. These are pieces of music that are definitely award-worthy. In the end, Mandy is absolutely not for everyone. In fact, as I said, I can see the majority of viewers being turned off quite early, but it will work for those who are open-minded film lovers. I was riveted from start to finish, and aside from feeling like some of the visuals were weird just to be weird, everything else about this movie is terrific. It's very hard to recommend a movie like this, but if you can get into it, the story, violence, bizarre imagery, and downright gut-wrenching moments all add up to a fantastic and insane experience. Mandy is great!