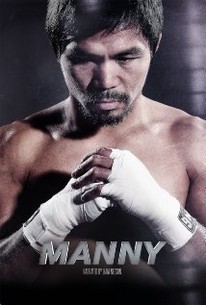 Synopsis: From abject poverty to becoming a ten time boxing world champion and history's first boxing congressman, international icon Manny Pacquiao is the definition of a Cinderella story. In the Philippines, he first entered the ring as a sixteen year old weighing 98 pounds with the goal of earning money to feed his family. Now, almost twenty years later, when he fights, the country of 100 million people comes to a complete standstill to watch. Today at the height of his career, he is faced with maneuvering an unscrupulous sport and political duties, while still maintaining a personal life. The question now is what bridge is too far for Manny Pacquiao to cross? (C) Gravitas

A narrow and borderline fawning hagiography that will no doubt find great favor among his fan base, while inspiring shrugs of indifference from those less invested in his tale.

It makes for a choppy, unsatisfying portrait when any topic outside the worshipful career momentum and expected dazzling fight footage - personal demons, his growth in a corrupt sport, the weight of being an icon - is addressed.

Banal, stentorian narration by Liam Neeson ("Once victory is stolen from you, what are you left with?") mostly gives the sense that it's the viewer being carried around the ring.

Only a fool would say it to his face, but eight-time divisional boxing champ Manny (Pacman) Pacquiao has a limp swing as a documentary subject.

Even as a promotional piece, Manny is too thin a nonfiction portrait of Manny Pacquiao, one of the greatest boxers of the modern era and the only one in history to win titles in eight different weight classes.

Manny stays entirely on the surface of Pacquiao's life and of a sport that's rife with dirty dealing and chicanery.

Pacquiao's the only boxer in history to win championships across eight weight classes. His story follows the classic Hero's Journey stages precisely, blow-by-blow, as it were.

A potential knockout documentary pulls most of its punches.

While a good introduction to Pacquiao's accomplishments, the movie as a whole is too shallow.

It's nothing groundbreaking as a sports doc, but Pacquiao's warm personality and amazing story make it a pretty great one.

There are no featured audience reviews yet. Click the link below to see what others say about Manny!