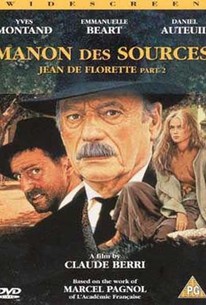 Manon of the Spring (Manon des Sources) has also been released as Jean de Florette II in the US, as it is a sequel to Claude Berri's Jean de Florette. Both films are drawn from the same source: Filmmaker/novelist Marcel Pagnol's 1952 rural romance, also titled Jean de Florette. Manon (Emmanuelle Beart), now fully grown, is a shepherdess who prefers to keep her distance from the local villagers. She is determined to uncover the truth behind the death of her father (played by Gerard Depardieu in Jean de Florette) and to wreak vengeance on the men she holds responsible. The more sympathetic of the two men, Ugolin (Daniel Auteil), is in love with Manon, but this does not weaken her resolve. She causes the village's water supply to diminish, blaming this action upon Ugolin and his duplicitous co-conspirator Cesar (Yves Montand). The upshot of this vengeful behavior ends in tragedy for all concerned. The joint winners of eight French Cesar awards, Jean de Florette and Manon of the Spring were released to the U.S. in tandem in 1987.

Critic Reviews for Manon of the Spring (Manon des Sources)

Another aching heartbreaker of a film by Berri that absorbs and rewards the audience for sticking with Manon on her sun-beaten quest.

Berri also remains a boringly uninteresting director, dotting every i and crossing every t with nothing much on his mind but platitude.

Berri is unable to overcome the inherent feebleness of the Manon character, here played ineffectually by the lovely and talented Emmanuelle Beart.

There is a satisfying symmetry to events, with Manon able to take her revenge on the Soubeyrans.

The acting, from that of the four major stars to the numerous supporting cast members, is without flaw.

The movie is stuffed with cues for arias that are never heard.

It makes a great mistake in its epilogue, accumulating and revealing surprises, giving it the feeling of a cheap melodrama. [Full Review in Spanish]

Claude Bern's direction is confident and controlled, and the performances of Daniel Auteuil and Yves Montand have great authority; but perhaps the casting of Emmanuelle Bean is less happy.

The Gallic version of peak Merchant Ivory: it really seems like the thing that it is can't help but be awful, and instead it's really great.

[VIDEO ESSAY] "Jean de Florette / Manon des Sources" is an emotionally potent movie whose lush depiction of Provence captures your imagination in such a tangible way that you feel as if you are living there during the period.

Manon of the Spring loses much of Jean de Florette's intensity ... [but] as a bookend set, these two pictures shouldn't be missed.

Audience Reviews for Manon of the Spring (Manon des Sources)

It is frustrating that Manon is such a weak and poorly-written character, which makes her "revenge" feel much less deserved, even though the film unfolds like a true Greek tragedy and is able to move us with a touching ending and the strength of Yves Montand's performance.

Raves for the prior film, Jean de Florette. This film, however, is bizarre and unsettling. Story is nowhere near as brilliantly conceived or beautiful. Seems like a straight-to-video bit of billingsgate rushed to market by a slasher film director. I give it a "M'eh".

Poetic, endearing, heartbreaking. the second part of Jean de Florette's tragedy deals with the consequences of the greed and hypocresy shown among the villagers in the first part and how it affects their lives. Some surprising things come up as well. I never thought that not only the characters, but myself as well, would all be changing our indignation and contempt for forgiveness.

In this sequel to `Jean de Florette', ten years have passed. Jean's daughter, Manon, has been living in the area near where her father died, she has been tending goats, has a dog, but has been living in poverty. At the end of ?Jean de Florette', we see Manon realizing that the Soubeyran's had blocked off her father's water supply, the movie ended with a horrified Manon. Early on in this concluding installment to the story, Manon realizes that the people in the nearby village knew about the water spring on their land but did not say anything. Some of these people were even distant cousins to Jean, but only the Soubeyran's knew this at the time and did not share this information. Near the halfway point in this movie, Manon discovers the source of the water for the whole village, she has her revenge by cutting off the water of those who killed her father. A bold and brazen move, but one that sends a strong message. This all seems very sensational and theatric, but the director's message of philosophical justice comes across in a satisfying way. The climax of the movie contains surprises that I won't mention here. While shocking, the viewers will find themselves thinking that they should have realized these plot points during the first movie. Manon of the Spring is just as good as the first installment, It would be great if these two movies could be cut together and released as one long epic, Highly recommended