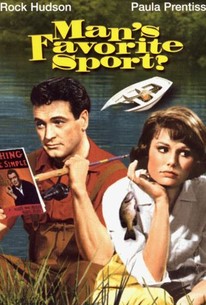 Roger Willoughby (Rock Hudson) is a super salesman of sporting goods who sells fishing equipment but knows nothing about the sport. Roger's boss Cadwalader (John McGiver) gets an idea from publicity director Abigail (Paula Prentiss) to enter him in a fishing contest, and the inept angler has a series of comic consequences before he wins the contest with some help from a bear. When Roger admits that his winning the event was merely luck, he turns in the prize and loses his job. Roger eventually wins Abigail's heart and gets his job back. Howard Hawks directs this slapstick comedy with his typical flair -- witty dialogue and effective sight gags included.

Joan Tewkesbury
as Woman in Elevator

Betty Hanna
as Woman in Elevator

Elise Kraal
as Girl on Motorbike

Matters are helped along somewhat by an attractive and spirited cast, but not enough to keep the film consistently amusing.

In many ways the quintessential Hollywood auteur movie.

Man's Favorite Sport?, the film's theme song has it, is girls. It certainly is not originality or comedy.

Outdoorsman-columnist Rock Hudson suddenly finds he has to live up to his reputation in this 1964 Howard Hawks comedy that's funnier than it has any right to be.

Hawks delivers his usual heavy-handed direction, but the film's premise is too flimsy to spread over two hours. The script is marred by tired comic routines and slow pacing.

Here Hawks moves a little slower, cribbing some of his own early jokes, but still dead funny.

Overly long screwball comedy from director Hawks who sticks to a formula he used better in Bringing Up Baby.

Late in the day, overlong, but vastly enjoyable Hawks' comedt

Here Hawks moves a little slower, cribbing some of his own early jokes, but still dead funny.

Paula is charming and goofy, Rock as adapt at comedy as always, a pleasant way to pass an hour and a half.