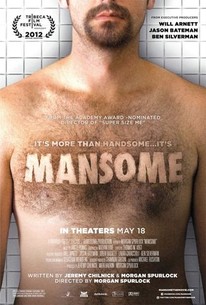 From America's greatest beardsman, to Morgan Spurlock's own mustache, Executive Producers Will Arnett, Jason Bateman and Ben Silverman bring us a hilarious look at men's identity in the 21st century. Models, actors, experts and comedians weigh in on what it is to be a man in a world where the definition of masculinity has become as diverse as a hipster's facial hair in Williamsburg. The hilarious follicles of men's idiosyncratic grooming habits are thoroughly combed over as men finally take a long hard look in the mirror. -- (C) Official Site

An amusing if slight look at the grooming, preening and stylistic ways of the 21st century man.

It's more first-person journal and travelogue than it is cultural archaeology, and as such it's basically OK.

As a documentary dissertation on all that it means to be male in the modern world, you'd be better off investing in the complete works of Ernest Hemingway and watching a few Samuel Fuller and/or John Milius films.

There's no real center to the film's potentially insightful topic, with Spurlock never zeroing in on a cohesive message.

As documentaries go, this is lip gloss.

The movie purports to be a lighthearted look at changing notions of masculinity and appearance. But unless you find something intrinsically hilarious about a man getting a pedicure, laughs are scarce.

You'll forget about this one while you're still watching it.

Reality TV lacks Spurlock's sly willingness to let the eccentric explain themselves, rather than letting them appear foolish. It's not deep, but then, it's about vanity.

Spurlock seems to be wholeheartedly interested in the motivating factors behind manscaping and other choices men make about their appearances.

Just because the film's subject is surfaces doesn't mean it only warrants a slight, surface treatment.

Mansome is arguably [Spurlock's] most insignificant, lightweight effort to date. Never mind that it doesn't provide any answers; it barely even asks a question.

A lighthearted and entertaining, but ultimately inconsequential look at masculine identity as seen through the varied grooming habits of the modern male.

Although the male grooming topic is potentially intriguing (including mustache obsessions, metrosexuals, and competitive beard growing), there is no real focus through the divergent subtopics. Told with humor and a bit of satirized machismo, the documentary is lighthearted and does not offer any significant insight into deeper issues such as male insecurities with body image or cultural pressures on the modern American man. It's pure fluff: light, pleasant and unmemorable. As a "documentary", it's flimsy and undeserving.

Morgan Spurlock, Will Arnett, and Jason Bateman explore men's grooming and its relationship to masculinity. What Mansome could be is an examination of masculinity in modern day pop culture, post-feminist movement. In fact, it could be the documentary version of all the strengths of Brief Interviews with Hideous Men. But instead its reliance on extreme reactions to male hair and its profile of a modern-day fop do little to deliver any salient cultural criticism. What emerges are the outliers of our society -- a man with a massive beard and a man who spends more time preening than most birds -- and I finished the film learning nothing new about the macrocosm and learning only dismissible factoids about the microcosm. Overall, Mansome, considering its wealth of talent, doesn't live up to its potential.

One of the newer efforts from semi-sterling documentary director Morgan Spurlock, Mansome is certainly one of his lesser efforts, reflected in its universal panning from critics and nearly invisible release. Though the description of the film is about the view of masculinity and possibly how men are perceived in society, it doesn't delve quite deep enough to do anything new or interesting. It touches upon things that are of interest, but overall it's trite and lazy. Instead of really looking into the Adonis factor or exploring the view men have of their place in the world, the film looks at different facets of the male appearance. Sections break this film up, including parts about beards, mustaches, and grooming, which circle each other, overlapping time and again. Celebrities lend their support with interviews on subjects that mostly cover facial hair. Jason Bateman and Will Arnett executive produced and star in this venture, turning up in bit parts throughout to lend their own opinions on these subjects while getting pampered at a spa. This tidbit of film is inane and makes it even more difficult to take anything Spurlock is pitching us, reliable. Though Spurlock has comically covered topics such as product placement, consumerism, and political hubris with ease, here there is little to find funny. Unless you find men being effeminate or rocking a styling do it's really a desert wasteland. The only section of the film that holds any interest is when they veer away from macho beardsmen and focus on a Sikh metrosexual who gets constant cosmetic touchups and cares quite a bit about his appearance. His backstory and choices, which he explains in depth, are the only part of this film that focuses on other men, or men that aren't happy to chime in with dullard opinions on masculinity. Though it's not a perfect film, I did find aspects of it engrossing, especially when Spurlock focuses on these men as a whole, not just what they can make funny for the film.

As a devoted fan of Morgan Spurlock, I was genuinely entertained by his comic observation into the world of male grooming, but the moderate insight into the topic brings this down to one of Spurlock's lesser efforts in the documentaries he's made. However, the celebrity interviews certainly shine in several parts, especially Will Arnett and Jason Bateman's trip to a high-class spa. If you're a devoted Spurlock fan like I am, it won't hurt for a viewing.